WATCH: Great White Leaps Out of Water with Surfers Close By at San Diego Beach 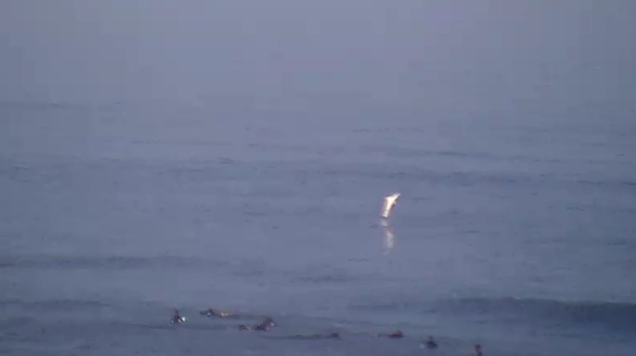 A Surfline camera captured the moment a Great White Shark leaped out of the ocean just beyond a lineup of surfers at Ocean Beach in San Diego, Calif., last week.

With a large wave heading their way, most early morning surfers seemed not to notice the shark breach the water.

Only a handful of guys swam back to shore while at least 30 stayed out with the surf, reports Surfline.

“Typically, Great White Sharks will breach the water during a sneak attack on prey, coming from deep below and shooting straight up to chomp an unsuspecting seal – hence the high-def, super slo-mo footage seen on Shark Week,” writes Surfline. “But it’s unclear what the shark at Ocean Beach was after, if anything.”

The footage would make anyone think twice about his or her next beach day.

Camera captures a shark jumping out of the water with surfers nearby at California beach https://t.co/9ApXgkOmKj pic.twitter.com/9TtJfXrFvG