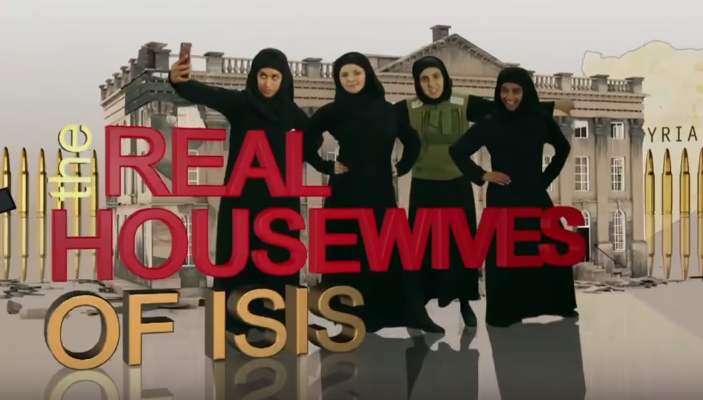 There is satire, and then there’s this.

A new show on the BBC 2 channel, "Revolting," took the popular "Real Housewives" series and lampooned it by creating their own version. The title?

"The Real Housewives of ISIS."

I know the word “epic” gets thrown around a lot, and most times the subject does not live up to the word. But in this case, the comedy sketch just keeps getting better as it goes.

The sketch features four women who live in a small room in a building that was blown up. Just like the real "Real Housewives," the women sit around, complain and talk about each other behind their backs.

“He won’t stop talking about his 40 virgins,” said one of the characters. “Why can’t he be happy with me?”

The sketch is a little more than a minute and a half, but every second is priceless.

However, some people were seriously offended by the sketch. Shocker!

I think Mr. Wight missed the point of the sketch. The show was basically calling out all of those people who downplay terrorism and the people behind it. Essentially, the show was bringing light to how barbaric the men of ISIS are toward their women by satirizing the mere thought of not taking them seriously.

All of these people are just offended, because no one has really had the guts to make fun of ISIS on such a public forum before. So insensitive!

Get over yourselves. Anything can be funny in the correct context. If you're so worried about their suffering, why don't you do something about it instead of fitting your outrage into 140 characters? Here's a thought: how about we stop apologizing for terrorists at every turn?

Umm, Islam is not a race. It's a religion, so there's that. This woman uses the word "conception" in her tweet as if the negative stereotypes of Islam were just pulled out of thin air. Keep trying. Thanks for playing.

In this overly offended world, sometimes you need to be able to laugh at certain things in order to humanize them. Television shows make fun of Christians and Jews on a constant basis, but it's rare that outrage toward those kinds of jokes makes headlines. Then again, Islam is pretty much off-limits in general, isn't it?

For video of the sketch, watch below:

Meet the Real Housewives of ISIS... from SJ Smith on Vimeo.