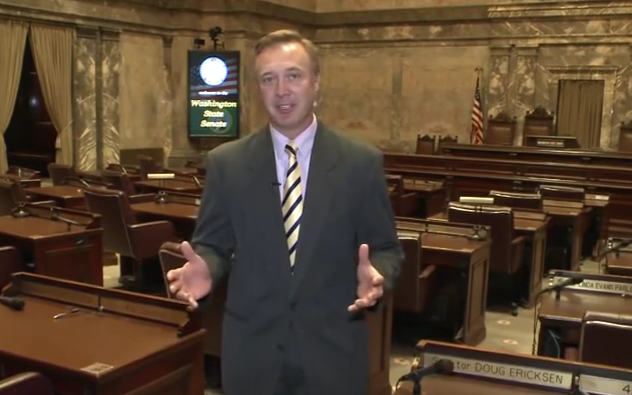 People are getting just a little sick and tired of having traffic backed up for miles because some special little snowflake felt triggered that there wasn’t enough sugar on their Frosted Flakes.

One state senator in Washington State is attempting to take matters into his own hands.

According to Q13 Fox in Seattle:

State Sen. Doug Ericksen, R-Ferndale, said Wednesday he is preparing a bill that would create a new crime of “economic terrorism” that would allow felony prosecution of protesters who block streets, cause property damage, threaten jobs and put public safety at risk.

The proposed bill is scheduled for next year’s legislation, and while he has clearly had enough of protesters becoming more than just protesters, Ericksen respects the rights of those protesters that do it the right way.

I respect the right to protest, but when it endangers people’s lives and property, it goes too far. Fear, intimidation and vandalism are not a legitimate form of political expression. Those who employ it must be called to account.

It’s about time that at least one lawmaker held people accountable for their actions. Just because these snowflakes get offended about an election -- that a lot of them didn’t even take part in -- doesn’t give them the right to disrupt other people’s lives who are just trying to go about their day.

This measure does not only apply to those who perform the action of “economic terrorism,” but it also extends to those who are in charge.

Ericksen said the penalties would also apply “to those who fund, organize, sponsor or otherwise encourage others to commit acts of economic terrorism. Accomplices may be required to pay restitution up to triple the amount of economic damage.”

The ACLU of Washington’s Doug Honig responded to the proposed bill with the following statement:

The statement throws out a lot of broad rhetoric, and we’ll need to see an actual bill.  But we’re already concerned that some of its loose terms appear to be targeting civil disobedience as ‘terrorism.’  That’s the kind of excessive approach to peaceful protest that our country and state do not need.

Let’s keep in mind that civil rights protesters who sat down at lunch counters could be seen as ‘disrupting business’ and ‘obstructing economic activity,’ and their courageous actions were opposed by segregationists as trying to ‘coerce business and government.'

Leave it to the ACLU to insert race into the conversation. No one, and I mean no one, thought of this proposed bill as a way to hold down any person of any race until people like those at the ACLU make it about that non-issue.

Either way, Erickson is taking a step in the right direction toward ensuring the average citizen their right to travel freely.