Today, President Trump participated in a classic White House tradition: the pardoning of the Thanksgiving turkey.

Speaking beside First Lady Melania Trump on the White House lawn, President Trump talked about how “Peas” beat out “Carrots” for the honor.

The two turkeys, selected from a farm in South Dakota, were voted on via Twitter and Peas was pronounced the winner, though by a razor thin margin.

Trump, in a jab referring to November’s midterm elections, joked that Carrots was requesting a "recount":

“This was a fair election,” said the President. “Unfortunately, carrots refused to concede and demanded a recount and we’re still fighting with carrots. And I will tell you we have come to a conclusion, Carrots. I’m sorry to tell you: the result did not change.”

“That’s too bad for Carrots,” said Trump, drawing laughter from the audience.

He also said that Peas is “so lucky” and that he’s “never seen such a beautiful turkey.”

The White House on Monday held a vote on Twitter for “[w]hich turkey should be pardoned during the National Thanksgiving Turkey Pardoning Ceremony.” 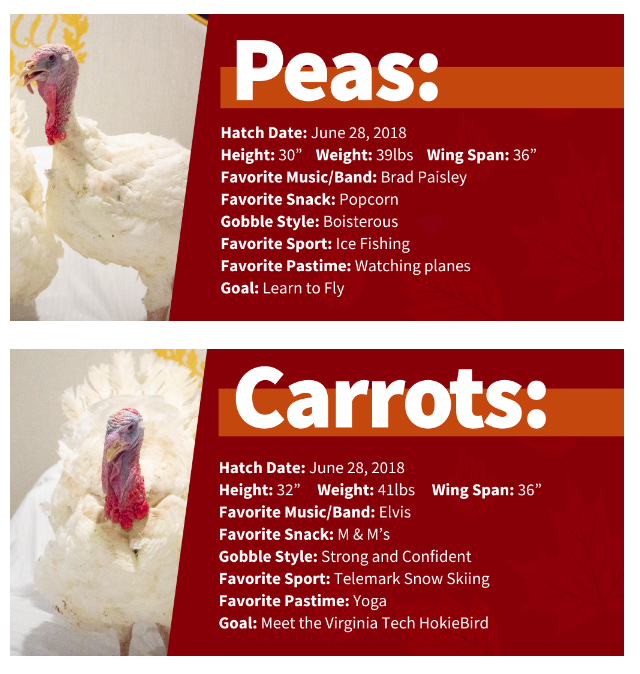 After a total of 50,969 votes were tallied on Tuesday, Peas was pronounced the winner. He must have won by slim margins, because the poll online showed the final results as Peas with 50 percent and Carrots with the other 50 percent.

Which turkey should be pardoned during the National Thanksgiving Turkey Pardoning Ceremony?

After the pardoning, Peas and Carrots will live at Virginia Tech’s “Gobblers Rest” exhibit.

The votes are in, and Peas has won the title of 2018 National Thanksgiving Turkey!

After today’s ceremony, both Peas and Carrots will make the journey to their new home at @virginia_tech’s “Gobbler’s Rest” exhibit in Blacksburg, Virginia. pic.twitter.com/4Xpegzmgfy

Carrots has nothing to worry about being the runner-up two days before Thanksgiving. He, too, was spared by the President, as both turkeys were sent to their new home at Virginia Tech’s “Gobblers Rest” exhibit after the ceremony, where they will be cared for by students and veterinarians, according to Fox News. The public can come see them at the exhibit in Blacksburg, Va.

Prior to the ceremony, the two turkeys lodged at the Willard InterContinental Hotel in downtown D.C. near the White House.

During his remarks, Trump wished all Americans “a very, very Happy Thanksgiving,” but extended especially warm wishes to the military servicemen and women abroad who are unable to spend the holiday with their families.

"As we gather together this week with those we love, we share our gratitude to all of those who spend this holiday very, very far from home, serving in our military overseas," said Trump.

Check out some fun facts about the ceremony below:

It's almost here! The time-honored tradition of the Presidential Turkey pardon, by the numbers: pic.twitter.com/EuGL47bZPD