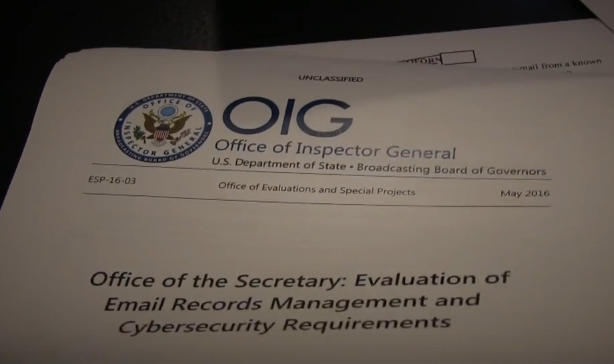 James O’Keefe’s Project Veritas Action (PVA) is at it again releasing another undercover video exposing the supposed truth behind the scenes of the Democratic National Committee (DNC).

The point of the video, as O’Keefe says, is to pose the question, “Who else did the FBI (Federal Bureau of Investigation) forget to speak with?”

The issue that PVA raises in the video concerns Information Technology Manager for the State Department, Cindy Almodovar.

The PVA journalist claims Almodovar had email communication with Democratic presidential nominee Hillary Clinton, Clinton's aide, Huma Abedin, and others within the State Department concerning Clinton’s use of a private email server.

When asked whether she was interviewed by the FBI as part of the investigation into Clinton’s emails, Almodovar says repeatedly that she was never questioned. Almodovar also points out the Washington Post and New York Times never contacted her concerning the matter.

Almodovar implies being questioned by the FBI was not necessary considering the benign quality of her email interaction with members of the Clinton State Department.

“It was a very general issue that comes from users all the time,” Almodovar said in the video. “People who don’t get emails in and out.”

During the video, when O’Keefe questions the “thoroughness” and “competency” of the original FBI investigation into Clinton’s emails, he brings up an “interesting” aspect “buried” in the State Department’s own investigation into the email scandal.

A portion of the investigation report reads:

According to the other S/ES-IRM staff member who raised concerns about the server, the Director [John Bentel] stated that the mission of s/ES-IRM is to support the Secretary and instructed the staff never to speak of the Secretary’s personal email server again.

According to the O’Keefe, Bentel told the FBI that those conversations “never occurred.” And when asked by the senate investigation into the email scandal about the concerns within the State Department Bentel asserted his Fifth Amendment right 87 times.

Even if Bentel and other members of the State Department are not guilty of any wrong doing, why contradict their own investigation into the email scandal and then plead the Fifth repeatedly?

Whatever the case may be, it doesn’t look like there will ever be any information volunteered or answered by people involved in this case unless there are charges brought against them.

Of course, the people involved could always ask for immunity. Oh, that’s right, they already did.

For the full PVA video, watch below: