Venezuelan Gov't Cracks Down on Dissent As Its People Revolt 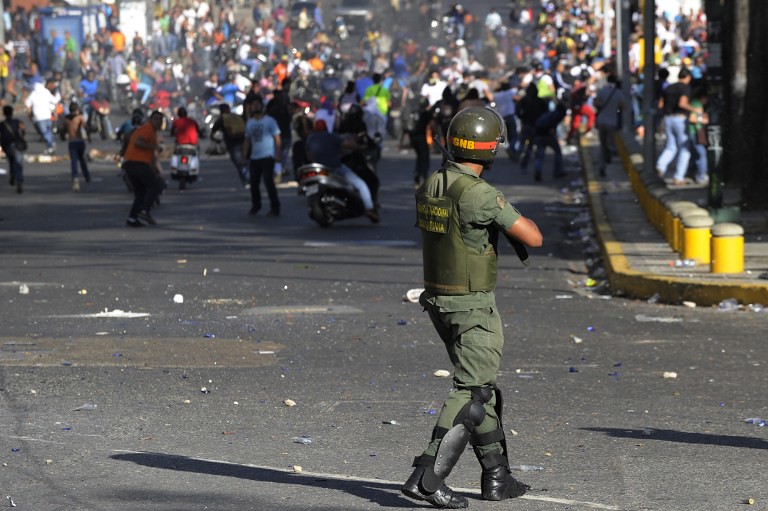 As if reciting a mantra, socialists tell people that their political philosophy is “for the people."

Yet, just as every collectivist state on Earth has ended up being “for” some people at the expense of the vast majority, productivity has tanked, livelihoods, medicine, and education have suffered, and, in the end (and often in the beginning), blood has been spilled in order to allow for the anti-individualist state to exist.

Venezuela is one of the latest examples: a collectivist state entering its death throes.

With its people already so desperate for food that people have turned to eating dogs, cats, flamingoes, and pigeons, and with the government forcing its citizens to work on the farms it nationalized, the collapsing socialist state is now clamping down on dissent.

According to Alexandra Ulmer and Girish Gupta of Reuters, Venezuelan police and military forces have violently quelled protests by thousands of citizens who turned out in favor of a politician opposing the dictatorial collectivist rule of Nicolas Maduro, the heir to recently deceased left-wing darling Hugo Chavez.

Last Friday, Maduro banned state governor and two-time presidential candidate Henrique Capriles from holding office for 15 years, because, you know, Maduro is for the people. This saw people rallying and pushing back, and thousands took to the streets to protest the move.

Venezuelans have had enough. Thousands are fleeing, and many of those who have not, or cannot, are demanding political change.

As the Reuters reporters note:

After a recall referendum against Maduro was quashed last year and amid fears that next year's presidential election will not be fair, opposition supporters say they have no option but to take to the street. But after years of marching many are cynical while others are too busy trying to find food.

And there’s another big, big problem.

Unsurprisingly, the socialist government of Venezuela banned the private ownership of firearms in 2012.

So how could it be that violent crime skyrocketed in Venezuela after the ban? And how could it be that many protesters are now on the verge of risking their lives when they stand up against the ruler of idyllic Venezuela who is crushing his opposition? Could it be that they are far, far outgunned? That the guns were taken by the high-minded socialists who are so pure they are always “for the people”?

What is happening in Venezuela is an example of the inevitable death spiral of collectivist states. The only way more violence will be avoided, the only way more civilians will not starve, or flee, or be killed by the armed thugs of the state, is if Maduro steps down and the right to private property is allowed to function once more in the nation.

This appears to be unlikely, but one can always hope.