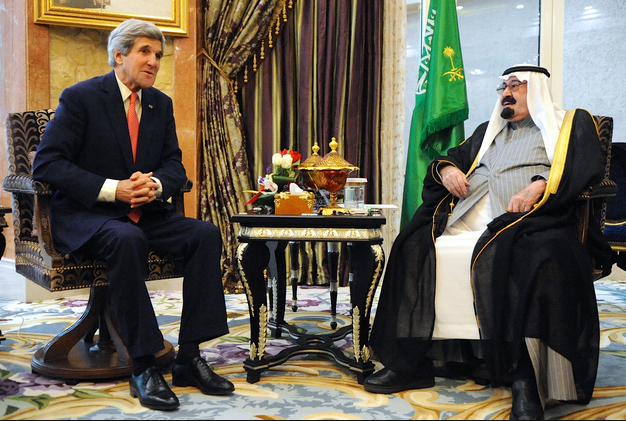 The Department of Defense is holding an essay contest “in honor of Saudi Arabia’s King Abdullah Bin Abdul-Aziz,” a King that oversaw a country that condemns a blogger to 1,000 lashes, suppresses dissent and women’s rights, and conducts regular beheadings.

Even so, the Defense Department can’t say enough good things about the recently deceased Saudi King.

“The essay competition is a fitting tribute to the life and leadership of the Saudi Arabian monarch,” said Army Gen. Martin E. Dempsey, Chairman of the Joint Chiefs of Staff. “In my job to train and advise his military forces, and in our relationship since, I found the king to be a man of remarkable character and courage.”

Well, only if you count beheadings as courageous.

King Abdullah and Saudi Arabia’s rulers “consolidated their iron grip on power through a systematic and ruthless campaign of persecution against peaceful activists in a bid to suppress any criticism of the state,” reports Amnesty International. The group says that Saudi Arabian authorities have held political protestors in secret, without charges, for weeks at a time.

And that’s just the beginning human rights abuses in the Kingdom overseen by the “courageous” King Abdullah.

You don’t have to take their word for it.

The U.S. State Department says Saudi Arabia is a country where:

Given his kingdom’s egregious human rights violations, the DOD’s choice of King Abdullah as subject for an essay contest seems .... a little odd.