The number of immigrants living in the United States hit a record 43.7 million in 2016, according to new stats out from the Center for Immigration Studies. And according to their projections, this is just the tip of the ever-migrating iceberg.

The study notes that between legal immigrants and illegally-present aliens, roughly 13.5 percent of the entire U.S. population – about one in eight people -- are foreign-born, the highest percentage in 106 years. This includes permanent legal residents, naturalized citizens, temporary works, students and illegal aliens.

Overall, the number of immigrants – which CIS estimates is actually probably slightly more than 45 million, given census gaps and an unknown number of illegals – has risen 12.6 million in just the last 16 years alone. By 2060, CIS estimates that number will have exceeded 78 million.

Between 2010 and 2016, the height of the Obama-era immigration boom, more than 8 million new immigrants settled in the United States, CIS added, noting this total is offset by the roughly 600,000 immigrants who either pass away or leave the U.S. each year.

CIS even provided a handy-dandy chart to help you wrap your mind around just how fast – and high – our immigrant population has grown over the past few decades. 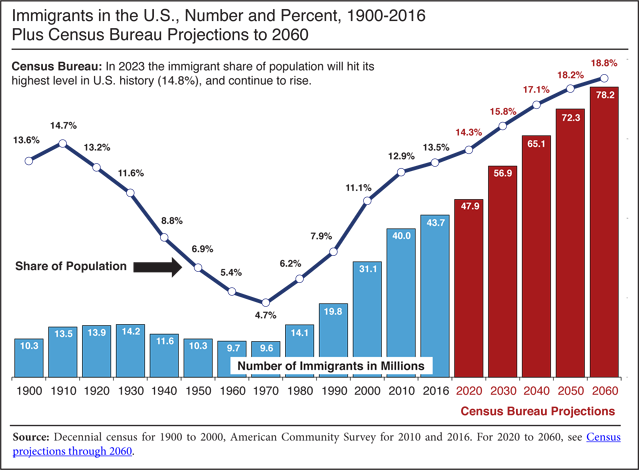 CIS notes that those nearly 44 million known foreign-born immigrants also account for roughly 16.6 million U.S.-born children. In total, the immigration analysis group notes that roughly one in five individuals in the U.S. are now either immigrants or first-generation Americans.

So where are all these folks coming from? Good question. The study notes that between 2010 and 2016, the top five sending countries with the highest percentage increase were Saudi Arabia (up 122 percent), Nepal (86 percent), Afghanistan (up 74 percent), Burma (up 73 percent), and Syria (up 62 percent).

Strictly numerically speaking, immigrants coming from India, China and the Dominican Republic had the highest population booms during those years.