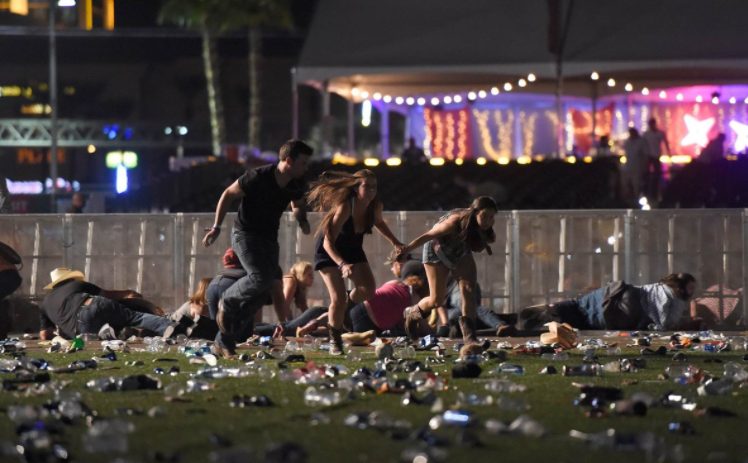 The death toll in the Las Vegas mass shooting on Sunday has risen to 58, with 515 people injured.

When asked about the shooter’s motive, he replied, “I can’t get into the mind of a psychopath at this moment.”

"I can't get into the mind of a psychopath at this point," Sheriff Joe Lombardo says when asked of Las Vegas gunman's potential motive. pic.twitter.com/IAdnZHfW3I

The White House offered a moment of silence for the hundreds of victims of the shooting.

Moments ago, @POTUS and @FLOTUS led a moment of silence for the Las Vegas victims. pic.twitter.com/lVsfbiSRNl

President Trump plans to visit Las Vegas on Wednesday to grieve with the friends and family of the victims, White House press secretary Sarah Huckabee Sanders said at Monday’s briefing.

There appears to be no connection to an international terrorist organization, though the investigation is ongoing.

ISIS has claimed responsibility for the massacre, but the FBI is pushing back hard saying the shooter had no connection to radical Islamic extremism.

The shooter committed suicide in his room on the 32nd floor of the Mandalay Bay Resort and Casino, police say.

They found 10 rifles inside Stephen Paddock's room, believed to have been purchased legally. At least one weapon was altered to function as an automatic weapon.

Police had no prior knowledge of Paddock before the attack, said Sheriff Lombardo.

The shooter has officially been identified as Stephen Paddock, 64, of Mesquite, Nevada.

Lombardo said that the department is "confident" that they have located person of interest Marilou Danley. She was described as Paddock's companion and roommate.

Police have also located the two vehicles in question.

The investigation is ongoing. The motive remains unknown.

The number of casualties makes this the deadliest shooting in American history.

Las Vegas police have provided a number for families looking to locate missing loved ones: 1-866-535-5654.

Las Vegas police have confirmed that there are over 20 people dead, more than 100 injured after a deadly mass shooting at a country music festival in Las Vegas, Nevada, on Sunday.

Las Vegas Metropolitan Police Sheriff Joseph Lombardo gave an update early Monday morning on the incident, saying that the "primary aggressor" was killed in a room on the 32nd floor of the Mandalay Bay Hotel where he was reported to have been shooting from.

Lombardo said that police are searching for a companion that was traveling with the now-deceased suspect. Her name is Marilou Danley, an Asian female that is 4'11 and weighs 111 pounds.

The sheriff said that Danley was the suspect's roommate and is a person of interest in the department's ongoing investigation.

The shooter's identity will not be released at this time, but was identified as a local resident of Las Vegas.

Lombardo added that the FBI is assisting Las Vegas police with the investigation and asked that any video of the incident that could contribute to their investigation be sent to police headquarters.

"Please bear with us. This is an ongoing investigation," he said. "But we are comfortable that the primary aggressor in the incident has expired or is no longer with us and isn't a threat."

"We are pretty confident that there is no longer a threat other than we are attempting to locate the person of interest," Lombardo said.

Claims of multiple shooters "have been proven to be false," he noted.

Police are also looking for two vehicles with the following license plates: 114-B40 and 19D-401.

Video continues to surface of the shooting incident at a country music festival in Las Vegas, Nevada, on Sunday.

This video shows the moment the shooting began at the Route 91 Harvest Music Festival and country singer Jason Aldean realized what was happening. He darted off stage for cover.

Other videos show rescue efforts as concert-goers help first responders carry victims from the concert space into ambulances and even volunteers' trucks using stretchers, wagons, and whatever else was available on the scene.

This video purports to show where the gun shots were fired from the 32nd floor of the Mandalay Bay Hotel.

Shooter caught on video! Shot out a window in the Mandalay Bay Resort off the #LasVegas strip. Watch the window near the blue sign. Injuries now up to 24 pic.twitter.com/OD3q3pgBlO

Las Vegas police believe there are no more shooters in the Sunday mass shooting at a country music festival near Mandalay Bay Resort and Casino, reports Fox News.

One suspect is "down," police confirmed.

Las Vegas police will be giving a media briefing at 12:45 P.M. local time.

Witnesses of the mass shooting in Las Vegas, Nevada, on Sunday are telling news outlets that it sounded like the shooter, or shooters, used machine guns.

One witness told CNN that she could hear "hundreds of rounds going off."

"It sounded like machine guns," she said. "We hid behind a building and we just heard hundreds of rounds going off."

At least two people are dead and 24 injured after a mass shooting at a music festival in Las Vegas, Nevada, on Sunday.

There appears to have been two shooters, with reports of one dead in a hotel room at the Mandalay Bay Resort and Casino after the person was said to be shooting at concert-goers across the street from the room's window.

Las Vegas police confirmed that one suspect is "down." 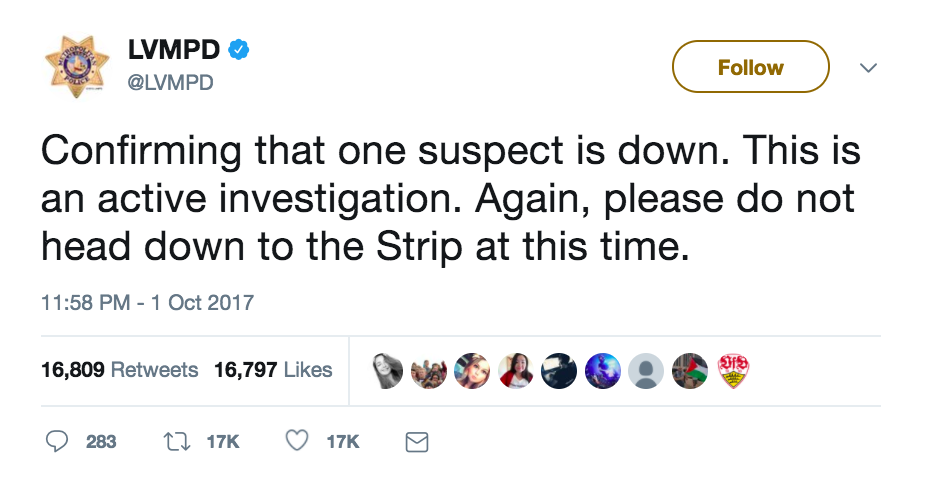 Police are asking people to avoid the area.

NEW: Police confirm one suspect is down after shooting on the Las Vegas Strip. "We have numerous victims right now" https://t.co/rLwgYdlThI pic.twitter.com/vN2bx530gP

Multiple people were injured after a shooting in Las Vegas, Nevada, near Mandalay Bay Resort and Casino on Sunday, reports NBC News.

The shooting occurred at the Route 91 Harvest Music Festival across the street from Mandalay Bay.

Videos are surfacing of the incident showing people screaming and running for cover.

Below is video that appears to show when the shooting occurred with gun shots heard in the background. (WARNING: Explicit language).

One man named Dan Bilzerian claimed to have seen a woman shot in the head. (WARNING: Explicit language).

Las Vegas police are investigating reports of one or more active shooters on the city strip.

There are reports of multiple dead bodies on the scene and that one suspect was found dead in a hotel room. We are waiting for confirmation for those reports.

This is a developing story. Stay tuned for updates.