UPDATE: 13 Out of 14 Cars of Amtrak Train Jumped the Tracks Over Washington Highway 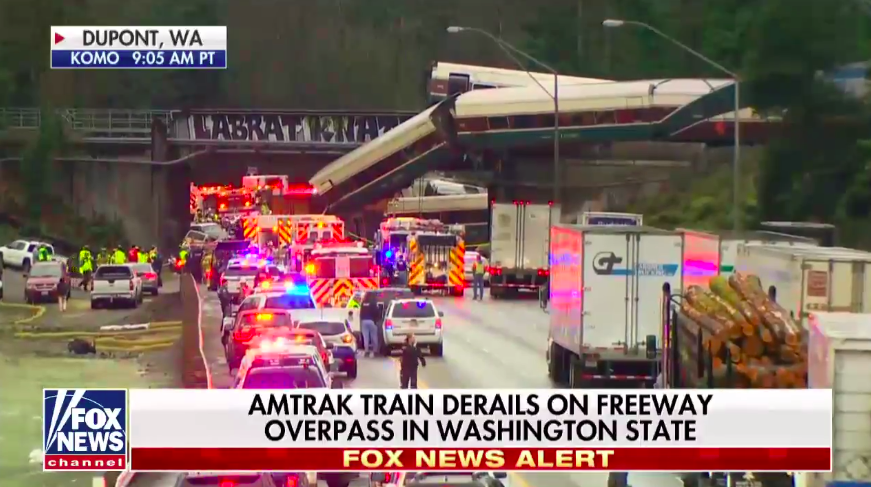 Thirteen out of 14 cars jumped off the tracks when an Amtrak passenger train derailed near DuPont, Washington, on Monday, according to officials.

The total included 12 cars and one engine. All but the head engine derailed.

The National Transportation Safety Board is sending a team from Washington, D.C., to investigate the incident.

NTSB said it knows that the train was traveling at 81 miles per hour, surpassing the speed limit of 79 miles per hour. The agency has not confirmed whether speed was a factor in the derailment.

"It's a little bit too early to know right now," said an NTSB official.

The train was entering a curve before it derailed.

"The Washington State Department of Transportation said the Seattle-Portland corridor was equipped with positive train control, which would have slowed a train hurtling into a curve above the posted speed, but that the system was not scheduled to be turned on until next year," the Washington Post reports. "Amtrak’s trains have been equipped with the devices, but they communicate with sensors along the track bed that had not been activated."

The death toll has not yet been confirmed. Authorities say 77 people have been taken to local hospitals for treatment.

Officials released a radio transmission of when the Amtrak conductor called 911. The conductor said that the train was coming around the corner to take the bridge over an Interstate 5 overpass and then "we went to the ground."

Authorities have released a radio transmission of the moment the Amtrak conductor in Washington called 911 https://t.co/5Kwq9Tz24d pic.twitter.com/4gN2TaIB5r

At least six people have been killed after an Amtrak passenger train derailed over a highway overpass Monday morning near DuPont, Washington, reports Fox News.

President Trump tweeted hours after the incident, saying that the derailment proves the need for his administration's $1 trillion infrastructure plan.

"Seven trillion dollars spent in the Middle East while our roads, bridges, tunnels, railways (and more) crumble! Not for long!" he wrote.

The train accident that just occurred in DuPont, WA shows more than ever why our soon to be submitted infrastructure plan must be approved quickly. Seven trillion dollars spent in the Middle East while our roads, bridges, tunnels, railways (and more) crumble! Not for long!

He tweeted minutes later his condolences for the victims of the incident.

"My thoughts and prayers are with everyone involved in the train accident in DuPont, Washington," said the President. "Thank you to all of our wonderful First Responders who are on the scene. We are currently monitoring here at the White House."

The National Transportation Safety Board sent a "go-team" from Washington, D.C., to investigate the derailment.

Trump called it an "accident" in his tweets.

Washington Governor Jay Inslee declared a state of emergency for the counties affected by the incident..

Multiple fatalities are reported after an Amtrak passenger train derailed Monday morning near DuPont, Washington over a highway overpass.

The Washington State Transportation Department said that the derailment came on the first day of rerouting of trains, Fox News reports. The train was on a new service route when the incident occurred.

"Amtrak said 78 passengers and five crew members were on board the train, part of its 'Cascades' service from Seattle to Portland, Ore.," according to Fox News.

At least 77 people have been transported to local hospitals, four of them in serious condition.

Pierce County Sheriff's Office spokesman Ed Troyer told CNN that there were “multiple fatalities,” but that he couldn’t provide an exact number.

He added that the deaths “are all contained to the train.”

Several motorists were injured after the train’s cars fell onto the Interstate 5 overpass but there were no fatalities among them, the Pierce County Sheriff's Department confirmed.

The National Transportation Safety Board is launching an investigation into the incident.