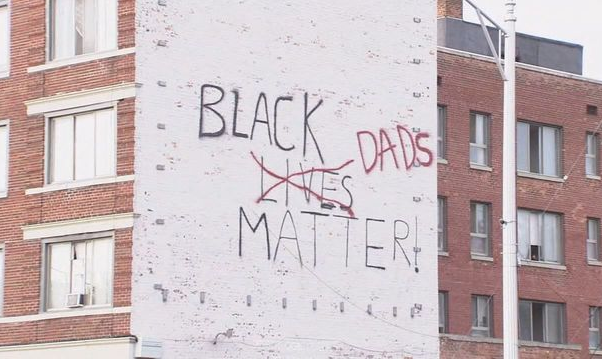 Someone in Highland Park, Mich. saw a message spray-painted on the side of a building and determined that it needed some updating.

The divisive slogan, “Black Lives Matter,” was someone’s way of sending a racially charged message to the surrounding community. One person, who has not yet been identified, decided that they would take it upon themselves to cross out the “Lives” part with spray paint and replace it with "Dads."

When Fox 2 in Detroit covered the situation and interviewed people to get their thoughts, they found people said the new slogan did hold water.

“The message is cogent to today right now, especially this particular area because there are not a lot of black dads who are actually being fathers,” one person said.

Stacey Calwise spoke about her own children, who are four and eight.

“Their dads are black but they're not around. So as far as black dads matter, not in their case,” she said.

Perhaps  the person who changed the BLM slogan was trying to say that if there were more two-parent households in predominantly black neighborhoods, the violence in these areas would lessen.

But local pastor and activist Reverend David Bullock commented, “As long as black lives are not as valuable as white lives, then we must continue to say Black Lives Matter.”

“In America we all have a point...Let's keep the main thing the main thing: We want all lives to matter equally,” Bullock continued.

Regardless of where you stand on the relevance of black dads in their children's lives, one thing's for certain: you cannot say that all lives matter while pushing the ideology of the Black Lives Matter group.