Update (2/26/19, 10:34 AM): Reuters is reporting that Univision anchor Jorge Ramos and his team are being deported from Venezuela after their two-plus hour detention by Venezuelan dictator Nicolas Maduro on Monday.

Univision retweeted a video posted by the media outlet’s national news correspondent, Pedro Ultreras, showing Ramos and the rest of his team leaving their hotel in an armored vehicle escorted by “US and Mexico Embassy” personnel:

At this moment the @UniNoticias team expelled from Venezuela is leaving the hotel in Caracas in our way to the airport. We are being accompanied by the US and Mexico Embassy personal. They are taking us in a bullet proof vehicles for our own security. @jorgeramosnews pic.twitter.com/DsYQnNxnzy

Original story: There should definitely be no spiking of the football when someone’s livelihood could be on the line. No matter how much we might dislike someone who “plays for the other side,” when that person is persecuted for actually practicing journalism, we should all take notice. It just goes to show that under a socialist regime, everyone is a possible target.

Univision’s Jorge Ramos and five other people on his team were detained by embattled Venezuelan dictator Nicolas Maduro on Monday after Maduro reportedly “didn’t like the questions” Ramos was asking him.

Maduro became upset with the line of questioning after about 17 minutes, got up and walked out, according to Ramos. "He didn't like the things we were asking, about the lack of democracy in Venezuela, the torture of political prisoners, about the humanitarian crisis that they are living," Ramos told Univision after his release.

Maduro ended the interview after Ramos showed him a video on an iPad of youths scavenging for food in a garbage truck near the palace.

After Maduro left the room his staff seized the video and Univision equipment, including TV and phones. The team was interrogated and put in a security room with the lights turned out. Information Minister, Jorge Rodriguez, told Ramos that the interview had not been authorized, even though it was coordinated with Maduro’s staff.

The video in question, that supposedly was the impetus for Maduro’s outrage towards Ramos and his team, was tweeted out by Univision anchor Enrique Acevedo and re-tweeted by Sen. Marco Rubio (R-Fla.).

According to Google translate, here is what Acevedo wrote:

These are the images that @jorgeramosnews showed Nicolas Maduro and that caused Maduro to get up from the interview, to retain the Univision team and confiscate his work. This is what Maduro does not want the world to see.

Attention: A @Univision team, headed by @jorgeramosnews, is being arbitrarily detained at the Miraflores Palace in Caracas. They were interviewing @NicolasMaduro but he didn't like the questions. Their technical equipment was also confiscated. https://t.co/c45tB0E4er 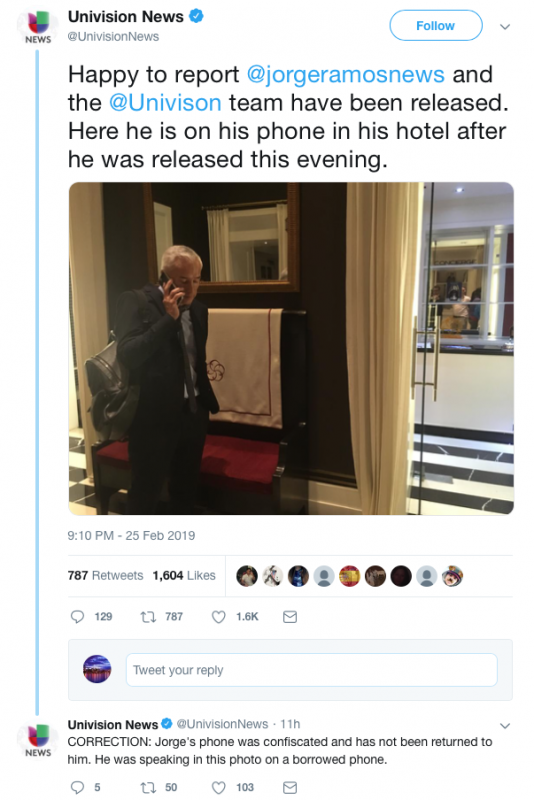 This is the type of thing socialism get you. There’s always a tyrant, or a group of tyrants, who take advantage of the people who put their trust in them. There’s no room for opposition in a socialist society. If their motives are questioned, you get the type of treatment, often times worse, that Ramos and his team received.