The United Nations (UN) has once again proven how utterly worthless they are as an organization who continually attempts to position itself as the moral voice of globalization. Well, no one asked the UN to tell people how to live their lives, and it’s not exactly clear what they’ve done to warrant their headquarters being located in the U.S.

Fellas, have you ever wondered what you can do to prevent the epidemic known as “mansplaining?” Yeah, neither have I. If a man, or woman for that matter, wants to say something in the U.S., they don’t need to basically ask permission to do so. But that’s pretty much what the UN wants you to do as a man.

The UN Women’s account on Twitter posted the definition of “mansplaining” on Saturday while also providing questions men can ask themselves before talking to a woman. 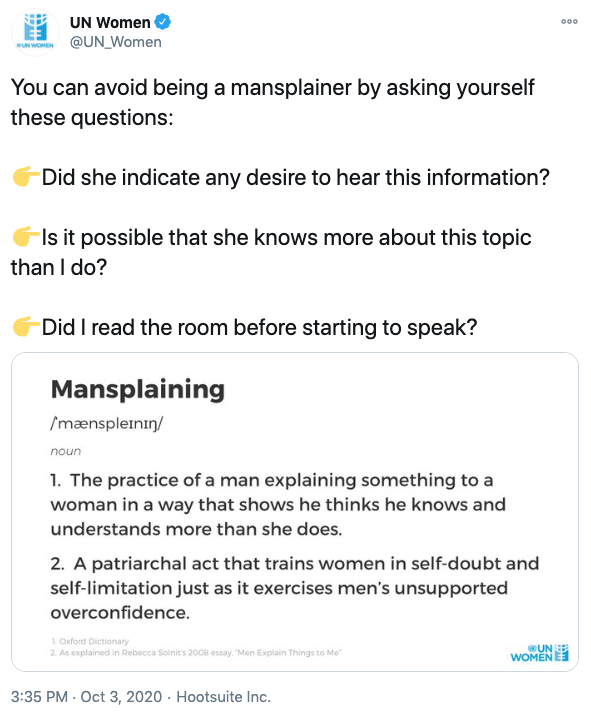 Now, let’s go through the questions, shall we?

“Did she indicate any desire to hear this information?”

That’s called striking up a conversation. Even if the woman in question has no desire to hear what you have to say, no one indicated whether they wanted to hear a rebuttal from the woman. Should this hypothetical woman have to ask herself a similar question in order to decide whether her response was wanted?

“Is it possible that she knows more about this topic than I do?”

Even if the woman did know more, does that mean you can never have a conversation about said topic? On the other hand, is it also possible that she knows less about this topic than you do? Of course it’s possible. Both are possible. That doesn’t mean you shouldn’t talk about certain topics.

“Did I read the room before starting to speak?”

If you’re just blurting out comments during a time where conversation and debate aren’t the purpose of why you’re in said room, then wouldn’t it be a bad time to speak for anyone, not just men? Plus, this is basically a repeat of the first question, especially if there are only two people in the room.

People explain things to others “in a way that shows” they think they know more than the person they’re talking to all the time. Both men AND women do so. It’s called human nature, not the patriarchy.

It’s like the UN and the fembots who came up with this put no thought into these questions, not that they were needed in the first place. Hey, kinda like the UN.