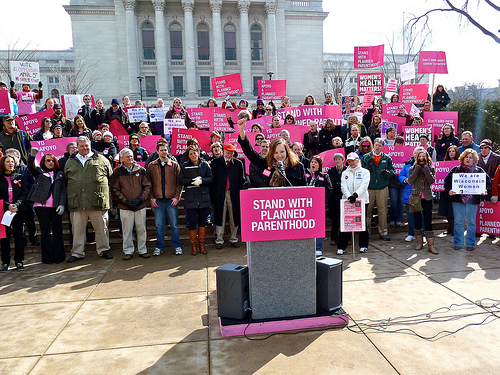 People who pay union dues may be donating to Planned Parenthood whether they like it or not. The Free Beacon reported on Monday that three of the biggest unions in America donated a total of $435,000 to Planned Parenthood during 2014. The three unions were the American Federation of State, County, and Municipal Employees (AFSCME), United Food and Commercial Workers (UFCW), and Service Employees International Union (SEIU). AFSCME and SEIU both represent public sector employees.​ But, the ties between Planned Parenthood and some of America's biggest unions go far beyond donations.

Almost all of the 2014 union-donated money was spent on political campaigns. The AFSCME donation of $400,000 went to the Planned Parenthood Action Fund. According to Open Secrets, during the 2014 election cycle, the Action Fund spent $930K on political campaigns. The money was almost equally divided between supporting Democratic Party candidates and negative campaigns against Republican Party candidates.

According to the Beacon, "UFCW categorized its $10,000 donation as political activity in federal labor filings":

Not all of the donations were political in nature. Some were categorized as charitable contributions to the billion-dollar organization, which performs more than 300,000 abortions each year. The remaining $25,000 given by AFSCME and SEIU were described as “grants” to a “tax-exempt organization.”

The relationship between the SEIU and Planned Parenthood is closer than one may think on first inspection. SEIU executive vice president Kirk Adams is married to Planned Parenthood President Cecile Richards. Which may also be the reason the SEIU came out so strongly against the videos released by the Center For Medical Progress that showed Planned Parenthood employees selling the body parts of unborn babies.

She followed up the tweet with a press release supporting the abortion-providing organization:

"We stand united with our allies at Planned Parenthood, champions of quality healthcare and a cornerstone of vital services to millions of Americans for decades. One in five women will rely on Planned Parenthood for health care in her lifetime.

"The outrageous attacks on Planned Parenthood are nothing more than extremists' attempts to advance their political agenda with complete disregard for the potential impacts on the health and well-being of the 2.7 million women, men and young people who rely on Planned Parenthood for basic preventive care.

Patrick Semmons, a vice president at the National Right to Work Foundation, told the Washington Free Beacon that union members may oppose abortion, but have little say in how their dues money is spent because only half of states bar coercive unionism.

“Union bosses will continue to use workers’ dues money as a slush fund to support controversial causes and organizations as long as union officials are empowered to order a worker fired simply for refusing to pay money to the union,” he said.

The video below is a Fox News report on union support of Planned Parenthood's fight against the Center For Medical Progress videos.