Do you believe in life after Trump? Cher sure doesn’t and she seems to think he’s coming back to kill America if Democrats don’t win in 2022.

On Saturday, the legendary diva took to Twitter with an angry, belligerent rant against the GOP, Trump, and “new draconian, racist” election integrity laws. In her all-caps, emoji-filled tweets, Cher fixated on Sam Cooke’s 1964 Civil Rights anthem “A Change Is Gonna Come,” which she said made her cry. So, basically, she’s just another leftist catastrophizing state laws securing the vote into “Jim Crow 2.0” or “Jim Eagle.”

Without evidence, the singer claimed that a third of Americans are “ripping freedom from” those who are black, brown, old, and poor. Projecting her own hatred and unhinged racial lens, she asserted Republicans “can’t win [the] democratic way, so they’ll do it by white dominance. Instead of ideas they have hate.” If Republicans can’t win the democratic way, how do they have control of 61 of 99 state legislative chambers and thus the ability to create and pass voting laws?

“Trump will kill [America] if we don’t vote in ’22,” she raged, bizarrely referencing the midterm elections in which Trump is not on the ballot.

All of this mishmash was written along with a gif labeled “This is what treason looks like” with rotating images from the Jan. 6 Capitol riot. 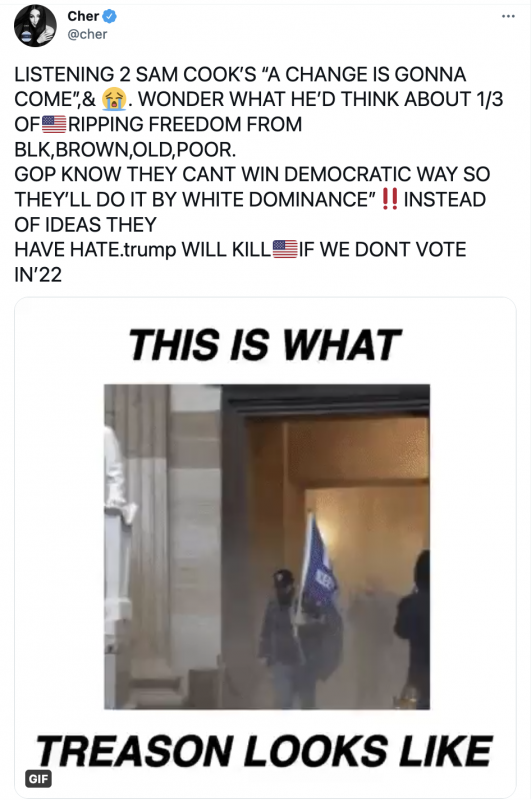 Later in the day Cher repeated her plea, calling for all to “stand shoulder [to] shoulder with [black] brothers [and] sisters, with every disenfranchised Democrat, in every state which has new draconian, racist laws.” Why does she assume that every black person marches in lockstep with the Democrat Party and what specific provisions in these laws could she possibly think disenfranchises anyone who can legally vote? Shockingly, she never says.

Again, without evidence, she claimed these “Republican laws” are “aimed at wiping Democrats off [America]’s map [for]ever” before urging everyone to “Vote [Democrat] 2022.” 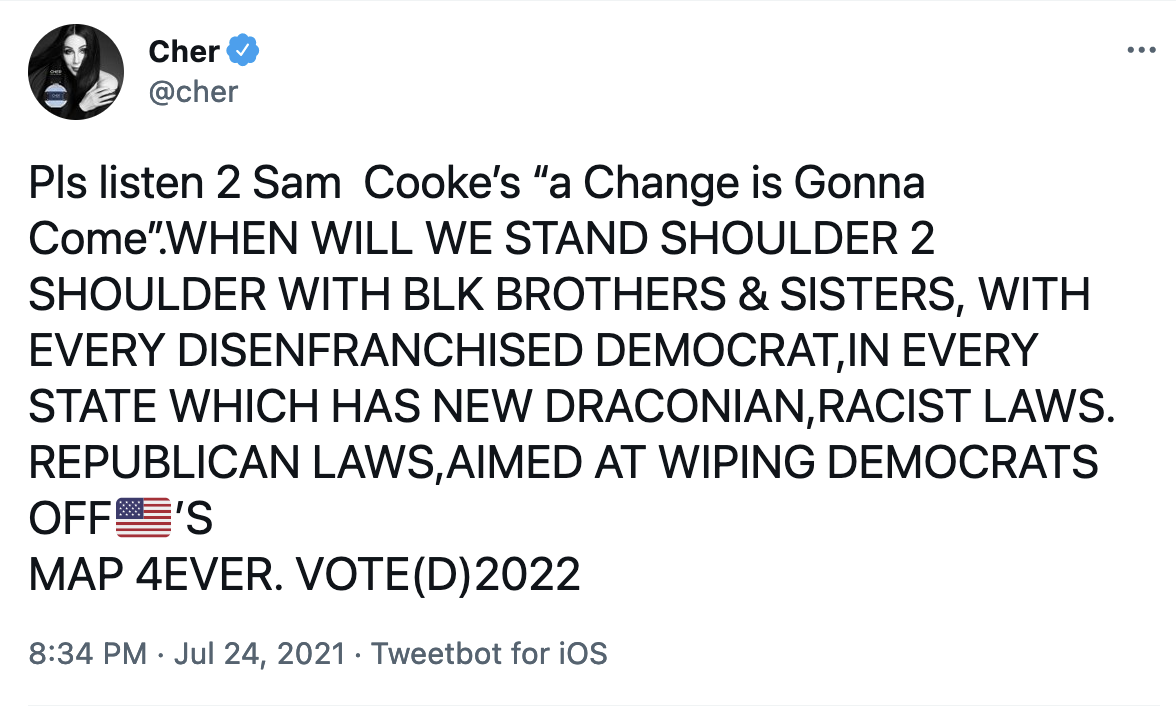 The message was quite muddled, but if I’m going to steelman her insane argument, I’d say maybe she meant Democrats need to gain a big enough majority in Congress to pass H.R. 1, the so-called “For the People Act,” because otherwise somehow Democrats will be disenfranchised by GOP state bills and then Trump will win in 2024, thus killing the country.

This is, of course, ridiculous, but Cher is no doubt simply listening to the media whose coverage of Republican state election laws has been 96% negative. The media have been completely biased in their coverage of the election security laws in state after state. Meanwhile, the Democrats’ attempted power grab to federalize state and local elections, key aspects of which are incredibly unpopular, gets media support.

As for Cher, the entertainer has a history of writing inflammatory tweets, especially involving Trump, then deleting them so we’ll see if these ones last or if she’ll wish she “could turn back time” by erasing them.