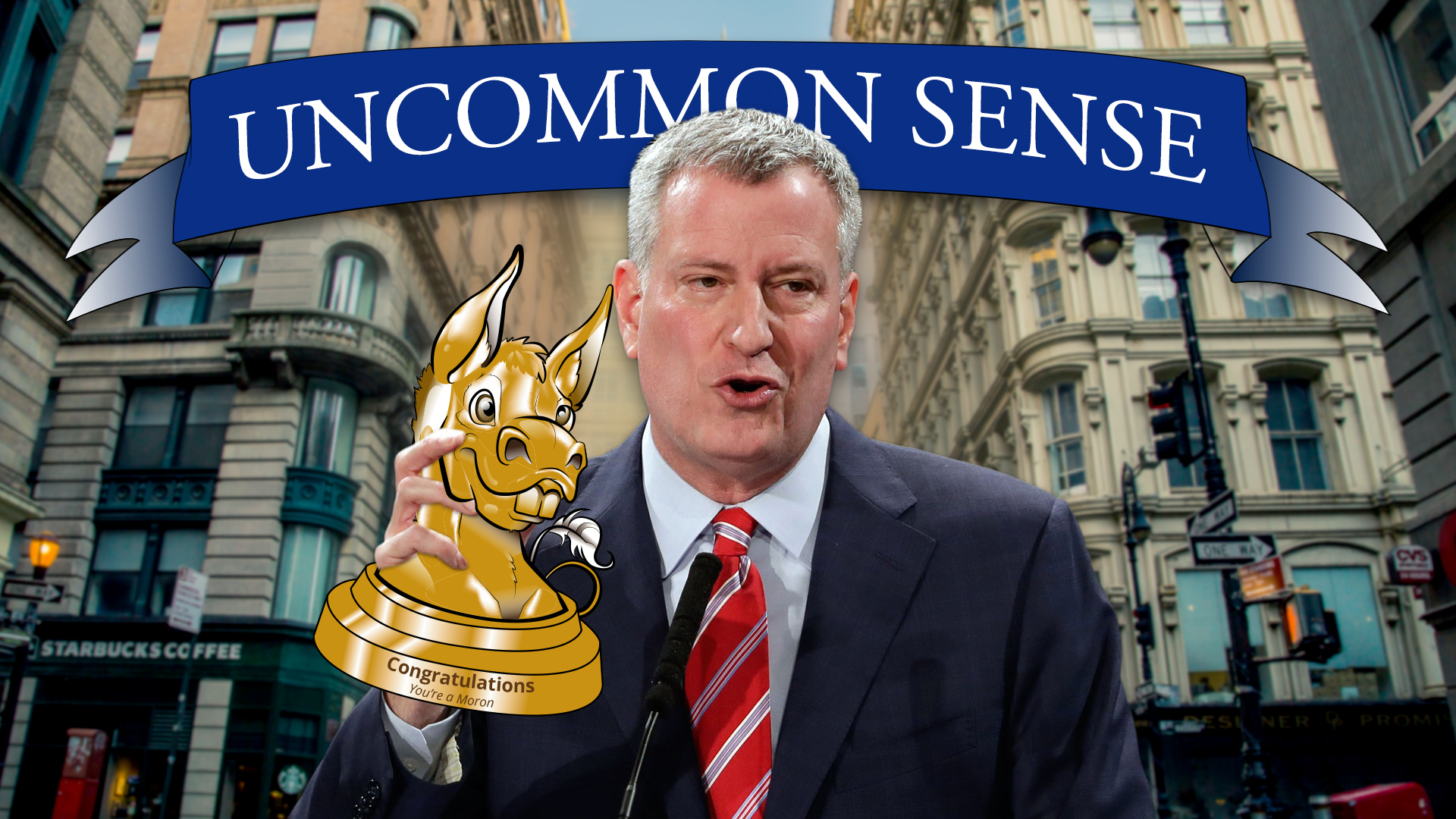 At Uncommon Sense, the mind-numbingly stupid will find no refuge. The sky is blue. Water is wet. Look both ways when crossing the street. Winter is coming.

The winner of this week’s “Golden Jackass” really doesn’t need an introduction. If Uncommon Sense had been around for decades, and we had a Hall of Fame, this person would definitely be an inductee.

And the winner is…(okay, I don’t really have the budget for an envelope yet)....New York City Mayor Bill de Blasio! You are this week’s winner of the “Golden Jackass!”

In case you haven’t heard -- and why would you? -- de Blasio says something numpty on pretty much a weekly basis. But this week takes the cake. Apparently, de Blasio and his ilk have come up with “guidance” on how to use “gender expression” for people that actually use the gender identity crybaby crap.

It gets better. This is what happens when you don’t use the correct gender pronouns in describing whatever “it” is:

Here's a list of preferred pronouns for whatever the hell a person says they want to be: Jee, Neh, Peh, Per, Thon, Pe, Xe and Ze.

Yeah, I don’t get it either. These pronouns sound more like alien characters in a sci-fi film than they do words describing actual people. Although, sometimes I wonder if there is a difference.

I have no problem with anyone living their life the way they so choose. But when you infringe on my rights in order to fulfill your agenda? That, I have a severe problem with.

Let’s get this straight for anyone playing the home game. You’re telling me that if I use the words you don’t want me to use (he, she, him, her) then you’re are going to fine me an exorbitant amount? Or frankly, at all? I guess you figured your latest attempt to hike taxes didn’t pan out, so you figured another way to generate revenue.

The new politically correct term for the mentally challenged is actually “de Blasio.”

Except that would actually be an insult to the mentally challenged. I apologize. And don’t worry, I’m sure my fine is in the mail.

In the “guidance” issued, de Blasio's office gave “examples of violations” so people can adjust their behavior accordingly. Here is one example:

Intentional or repeated refusal to use an individual’s preferred name, pronoun or title.  For example, repeatedly calling a transgender woman “him” or “Mr.” after she has made clear which pronouns and title she uses.

If society keeps electing fools like de Blasio, it won’t be long before people begin getting fined for saying the sky is blue because some idiot will say it violates his right to call the sky chartreuse.

I thought I just heard George Orwell say, “I told you so!”

Bill de Blasio is everything that is wrong with the United States. If you voted for him, you should probably have your library card revoked.

By the way, how can something be a “guideline” if you are also using it to fine people? That’s called a law. These are not guidelines. These are just more ways for the government to control you. They are taking political correctness and making it law, and frankly I’m sick of it.

Political correctness is the root of all evil. It's a tool politicians use to keep from having to pass a law that controls different aspects of our lives. That’s why I live my life as politically incorrect as possible.

The last piece of this guidance that I will share will give you insight as to how de Blasio and his lemmings want you to live your life:

Employment:  It is unlawful to refuse to hire, promote, or fire an individual because of a person’s actual or perceived gender, including actual or perceived status as a transgender person.  It is also unlawful to set different terms and conditions of employment because of an employee’s gender.  Examples of terms and conditions of employment include work assignments, employee benefits, and keeping the workplace free from harassment.

It is also unlawful to be a dictator, but I don’t see anyone stopping de Blasio. Therefore, I'm making it unlawful to follow de Blasio’s edicts.

New York City Mayor Bill de Blasio is the very definition of a “Golden Jackass.” I feel like this trophy was made for the likes of him.