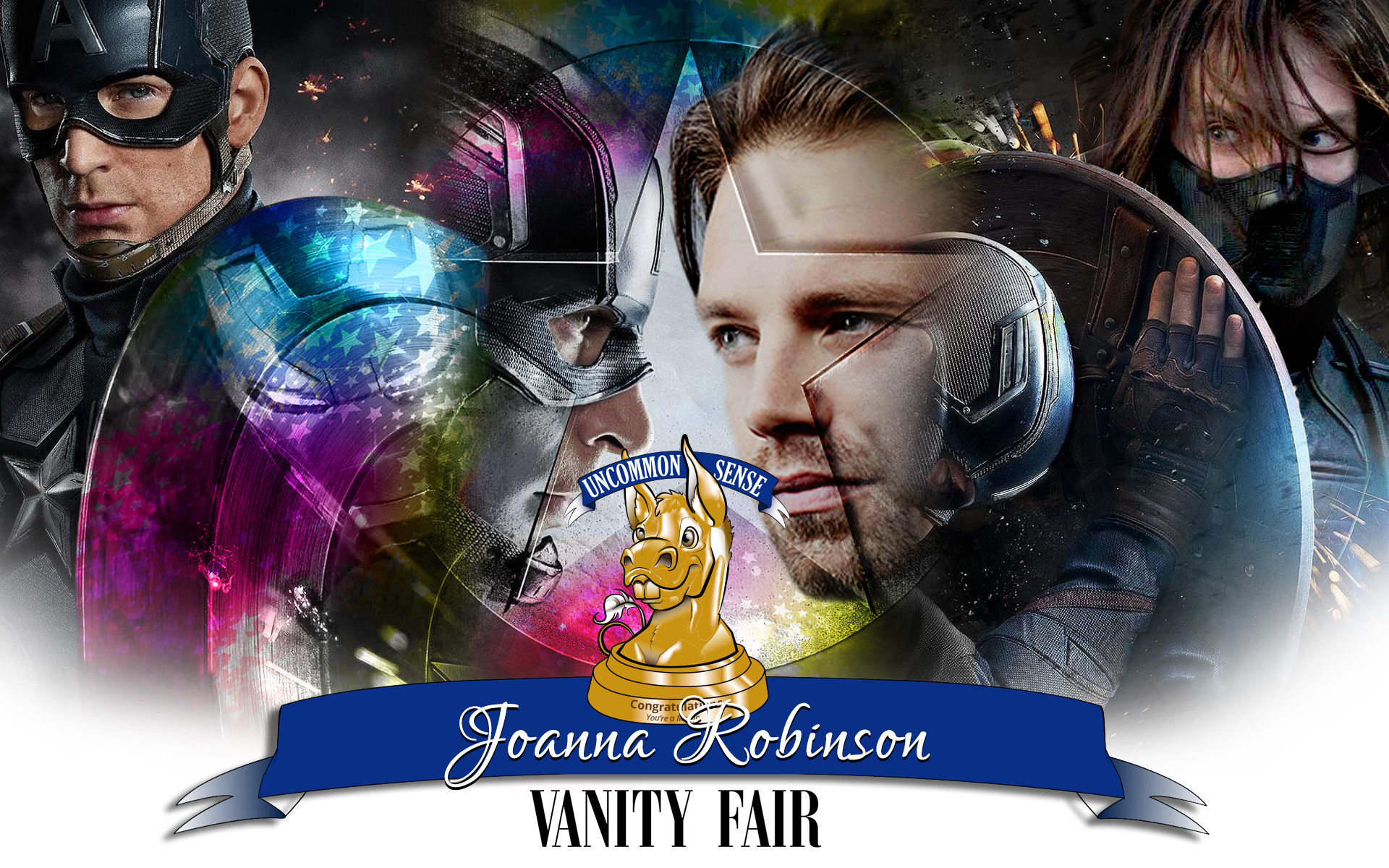 At Uncommon Sense, the mind-numbingly stupid will find no refuge. The sky is blue. Water is wet. Look both ways when crossing the street. Sometimes you feel like a nut, sometimes you don’t.

This week’s winner of the growing-in-prestige “Golden Jackass” is TV and film writer for “Vanity Fair,” Joanna Robinson.

Robinson wrote an article last Sunday that attempted to review the new Marvel film, “Captain America: Civil War.” Personally, I have not seen the new movie yet, but I have watched all the other films that have included America’s captain.

It’s not quite clear whether Robinson’s article was supposed to be a review of the film or if the article was just a vehicle for Robinson to get all “inclusive” on everybody.

The main premise for Robinson’s article was to display her disappointment that the writers of the film did not explore the possibility of Captain America’s (also known as Steve Rogers) homosexuality.

You heard me correctly. Robinson wonders why writers did not give in to a segment of the Internet that believes that Captain America’s true love interest is his longtime loyal friend Bucky Barnes instead of Agent Peggy Carter or her niece, Sharon Carter.

I wonder if Robinson knows that all of these superhero movies are based on stories from comic books that have been around for decades. The original stories have already been written. The writers that adapt the story for film know that if they drastically change any part of the specific superhero’s mythology, long time and even newer fans will question why they altered what actually happened.

In the Marvel movie universe, Barnes has been Rogers’ best friend since childhood. Bucky enlists in the U.S. Army going into World War II, but Rogers repeatedly got rejected because of his size and multiple health and physical issues. Bucky went off to war and reunited with Rogers after he had become Captain America.

They were childhood best friends. Nothing more, nothing less. The major problem that I have with Robinson is not just the fact that she doesn’t seem to care about the translation and continuity from comic book to big screen, but the issue that the writers should explored Captain America’s sexuality.

Here’s one of Robinson’s ever so tolerant musings about the subject at hand:

...doesn’t “Captain America: Civil War” go out of its way to “define” Bucky and Steve’s relationship when Cap smooches Sharon Carter (Emily VanCamp) while Bucky looks on approvingly? Where’s the room for interpretation in that moment?

Why does there need to be interpretation? How does Rogers kissing a woman make the movie go out of its way to promote Rogers’ natural inclination of preferring to kiss women? That’s would be like asking Robinson to make pizzas so that we are left wondering if she really is a writer.

Yet another pseudo-intellectual slice of wisdom from Robinson:

But Marvel seems to think it has to have its heroes in heterosexual love affairs in order to maximize audience appeal. But with the franchise slowly making room for women to be more than girlfriends and sidekicks (seriously, Sharon should have been on that tarmac), a love story just for the sake of some kisses and yearning seems out of place in these spirited adventures.

Oh, Joanna. Marvel doesn’t “seem to think” anything. The fact that Captain America is a straight male has been known since the comic was created in 1941. You’re telling me that since women are more than just love interests in movies now that a love story seemed out of place?

IT’S A MOVIE! This movie is about superheroes that stretch our imaginations, because we could never fathom having the powers that these individuals possess. That’s the magic of these films. The magic isn’t whether Captain America likes men or women (but, for the record, he likes women).

So while Marvel was likely never going to make the homoerotic subtext of Cap and Bucky into text, would it really have hurt to keep their relationship more ambiguous? As if to put the nail in the coffin of speculation, Bucky and Cap paused for a moment in the middle of snowy Siberia to reminisce about their days chasing skirts in pre-War Brooklyn. It’s a sweet, human bonding moment but one that also bristles with heterosexual virility. If Disney isn’t inclined to give audiences a gay superhero, couldn’t they have at least left us the dream of Bucky and Cap?

To answer your first question, yes! There was no ambiguity to begin with. Those of us that think with our thinking caps on know that there was no inkling of any homoerotic fantasy you might have wanted to see in the movies.

What is wrong with “heterosexual virility?” Why is it so wrong for a man to be a man these days? There is a segment of the audience that will say, “Oh, men have it easier than anyone.” Really?

If you are white, straight, a man and educated in today’s climate, you are vilified for being each of those things. If you’re white, you’re racist. If you’re straight, you’re a homophobe. If you’re a man, you’re conducting a war on women. If you’re educated, you didn’t earn what you worked hard for.

I’d like to thank liberals for showing me how tolerant they are. Remember, the most intolerant people are those that constantly preach tolerance.

By the way I am all of those things: a white, straight, educated man. Here’s the kicker. I am not racist, homophobic or sexist, and I earned every damn thing I worked hard for.

I guess Joanna Robinson does, and for her excellent show of tolerance, she receives that gorgeous “Golden Jackass.”

What did you think of this week’s “Golden Jackass” recipient? Who would you nominate for next week’s award? Let us know in the comment section below.