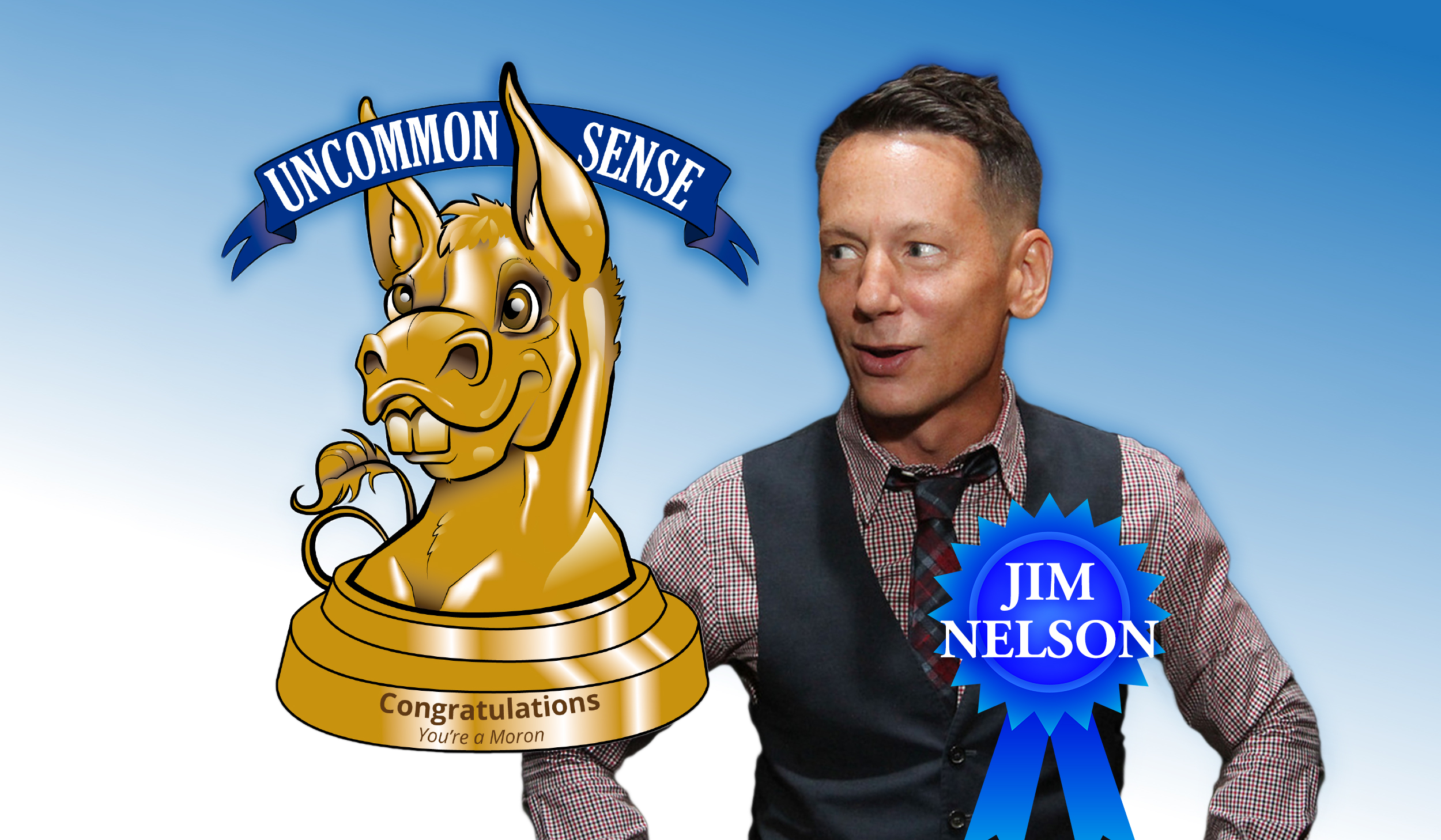 At Uncommon Sense, the mind-numbingly stupid will find no refuge. The sky is blue. Water is wet. Look both ways when crossing the street. Choosy moms choose Jif.

There are no “special little snowflakes” here. No one gets a trophy, except those who deserve one for being exceptionally soft. This is a place where adults can be adults and begin acting like it openly again.

We don’t prey on people’s legitimate sensitivities, but we hunt for faux outrage - and whatever the heck “micro-aggressions” are supposed to be. It’s time to begin using your brain jelly.

So buckle-up. We’re going to Liberalville, and taking them to a place called Reality!

This week’s trophy goes to GQ writer, Jim Nelson. Why you ask? Well, I’ll tell you, my well-enlightened friends.

Nelson is this week’s winner because of an article he released on Thursday called (and I can’t make this up): “Why Obama Will Go Down as One of the Greatest Presidents of All Time.”

I’ll wait for you to try to reclaim your breakfast, brunch, lunch, dinner or late-night snack…

What makes Nelson an even more worthy recipient of this week’s “Golden Jackass” trophy is that he never actually goes into detail as to why President Obama will go down as one of the greatest presidents of all time.

Let me explain. Better yet, let Nelson’s own words explain, and then I’ll rebut his eloquence.

Barack Obama will long be revered because he’s charismatic, presided over an economic revival, and changed and elevated the view of the presidency.

“Economic revival?” Really? Is that why so many union members are clamoring for a $15 minimum wage? Is Nelson referencing how many people are on food stamps? Or maybe he’s talking about how Obama has essentially doubled our national debt during his time in office. No, wait! He’s got to be talking about that financial windfall called Obamacare…right? Are you guys still here?

The only thing Obama has elevated since becoming president is the blood pressure of people with common sense all over this great nation.

Here’s another gem that Nelson probably thought was brilliant:

More to the point, Obama’s legacy is the sort that gets canonized. Because the first rule of Hall of Fame-dom: The times have to suck for the president not to. Civil wars, World Wars, depressions and recessions. You got to have ’em if you wanna be great. That’s why we rate the Washingtons, Lincolns, and Roosevelts over That Fat Guy with the Walrus Mustache. Like Obama, these Great Men were dealt sucky hands, won big, and left the country better off than it was before.

By “That Fat Guy with the Walrus Mustache," we’ll assume Nelson is talking about President William Howard Taft. Some people would probably say that he was trying to add humor to his story by (I’m going to use liberal words here, so brace yourself) fat-shaming a president.

However, I’m going to go on a limb here and say Nelson didn’t actually have an idea who Taft was, and decided to just describe what he saw in a picture.

That would be like not knowing who Obama was and calling him “That Guy with the Elephant Ears Who Can’t Decide Which Golf Outfit to Wear.”

The last little Nelson nugget I decided was worth my wrath was this:

With Obama, each thoughtful step of the way, from his soaring acceptance speech (“The road ahead will be long. Our climb will be steep…”) to his epic speeches on race and religion, his responses to the shootings in Tucson and Newtown, the killing of Osama bin Laden, the opening of Cuba (“Todos somos Americanos!”), and countless other momentous occasions, he knew how to speak to our better angels at a time when it was hard to locate any angels.

Is it just me, or did this guy just say that anyone that didn’t agree with Obama is no angel? Let me get this straight…if you don’t agree with the guy that has done more to alienate people of faith you’re essentially not a good person?

That’s an oxymoron, right? Or just moronic. I can never tell the difference.

So Mr. Nelson, do you have anything of substance to contribute as to why you think Obama will be remembered as a great president? Because basically, your argument is that Obama speaks well. What you’re really saying is that if Obama had stuck to being a lawyer he could have sold a ketchup popsicle to a woman in white gloves. Still doesn't make him a great president.

If you had actually put some thought into your article, I might have seriously listened to your argument. I would never agree, but I would have listened.

Any thoughts on who should get next week’s award? Let us know in the comments section.