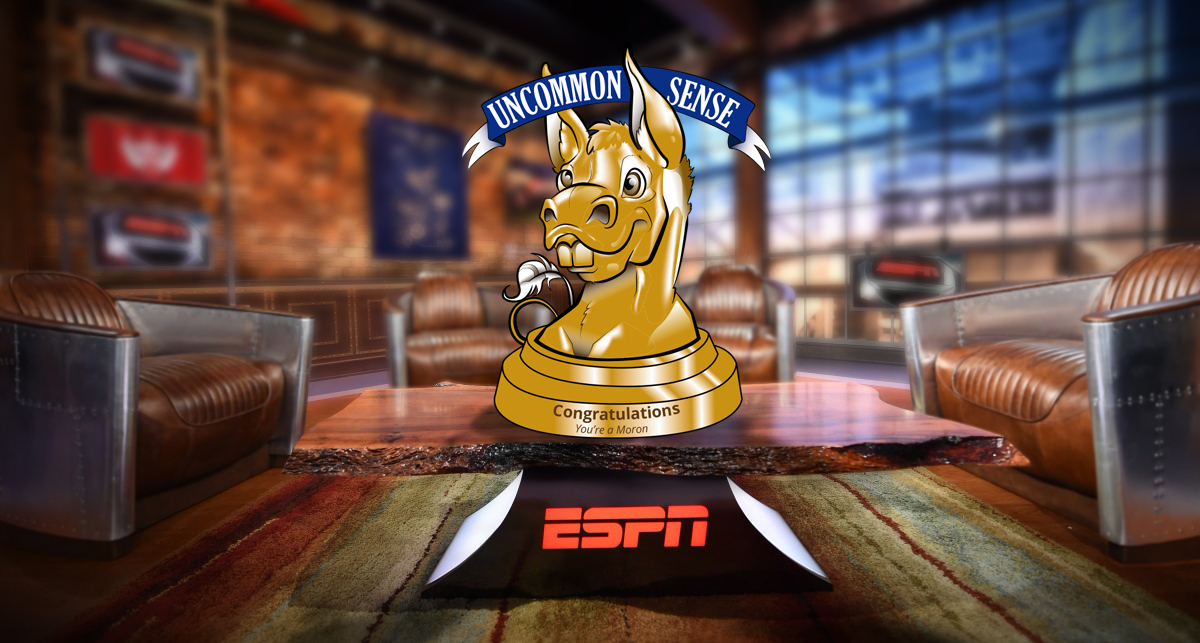 Welcome to "Uncommon Sense." This is a safe space to mock “safe spaces.” This is the place to offend the easily offended.

At Uncommon Sense, the mind-numbingly stupid will find no refuge. The sky is blue. Water is wet. Look both ways when crossing the street. The best part of waking up is Folgers in your cup.

This week’s winner of the ever-growing-in-prestige “Golden Jackass” trophy are the fine people at ESPN.

As you may already know, on April 20, ESPN decided to fire baseball analyst and former MLB pitcher Curt Schilling for posting a meme criticizing “inclusivity” in the transgender bathroom debate.

Now, I’m not going to get into the bathroom debate, because it has been talked over to death. Just like the celebrities that won the “Golden Jackass” last week for boycotting North Carolina, my problem is with the people at ESPN and other sports media personalities that take it upon themselves to be far-left hypocrites.

We need to understand where this is coming from in order to know how we got to this place. ESPN is a subsidiary of the all-seeing, all-knowing Disney Company. ESPN gets their directives and modus operandi from the parent company.

However, ESPN is big enough to rule on their own, so we're placing the blame squarely on them in this instance.

In firing Schilling, ESPN showed their true colors once and for all as blatant hypocrites. While the picture in the meme Schilling sent out was NSFW, the message of it was perfectly fine. And whether you agree with the message or not, Schilling was and is entitled to his opinion on the matter.

Here is the meme in question, without the picture of the man dressed as a woman in it. It’s not that “trans” people make me sick, because to each their own, but this particular fake “trans” person is more than meets the eye. I literally die a little inside every time I have to look at the full meme.

For the sake of this edition of Uncommon Sense, and your eyes, is only the verbiage of the Schilling meme: 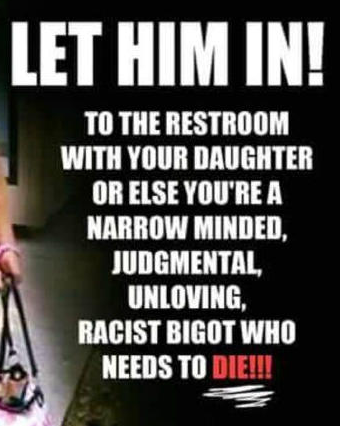 While Schilling was not the first person to post this meme, he is perfectly entitled to that opinion. Just as the other side of the argument is entitled to their opinion, whether you agree with it or not.

The major issue here is that the Left seems to think that only their opinion should be heard, and that anyone who voices a differing view must be a hateful, bigoted, racist, prejudiced, ill-informed, sexist, ageist, Bible-thumping, meat-eating, gun-toting, redneck, Nazi-loving, Islamophobic, homophobic, transphobic, femmephobic, arachnophobic…

Sorry. I blacked out there for a second.

ESPN is an inclusive company. Curt Schilling has been advised that his conduct was unacceptable and his employment with ESPN has been terminated.

Doesn’t being “inclusive” mean including everyone? I guess ESPN only thinks to “include” you if you agree with their ideology, which aligns with the Left.

And here's another question. Should a network known for their consistently good sports coverage over the years be taking political stances?

The answer is no. Just report the sports. I would completely understand if one of their on-air personalities went on a hate-filled tirade about a sensitive subject on camera, but all Schilling did was voice a sarcastic point of view on a topic that he believed should be “common sense.”

In an interview on the Breitbart News Patriot Forum Wednesday, Schilling didn't hold back his thoughts on the hypocrisy of ESPN’s decision:

It was apparent to me early on that if you wanted to go off topic as a sportsperson, you had to go off topic left or you were going to get into trouble[…]Some of the most racist things that I’ve ever heard come out of people that are on the air at ESPN. There are some of the biggest racists in sports commentating, and you take it for what it is. You know who they are. You know what they are. I like that they are openly because then you know who they are. You know that they exist[…]But I had people come up to me and go [whispering] ‘Hey, I’m with ya. I’m a Republican, too.’ But they had to whisper. It was like a deadly serious thing. Like religion on the table was a much easier discussion than who you voted for.

A lot of these sports networks are huge hypocrites simply because they still employ people that have said, done or have been accused of doing questionable things. Examples:

It is pretty clear that ESPN, and by association Disney (who meticulously controls everything they own), has definite bias against anything representing an anti-left ideology.

It’s no wonder that some big personalities have left or are leaving ESPN for Fox Sports (Colin Cowherd and Skip Bayless).

All in all, ESPN has abandoned what they used to do best (which was, well, sports coverage) and has become just another spoke on the proverbial radical left wheel. It will only get worse before it gets better. We always knew that the regular news was biased, but who would have ever thought that people reporting sports would become yet another mouthpiece for “uncommon sense?”

Therefore, we would like to bestow this week’s “Golden Jackass” to ESPN.

What are your thoughts on this week’s winner? Who would you nominate for next week’s “Golden Jackass?” Let us know in the comments below.