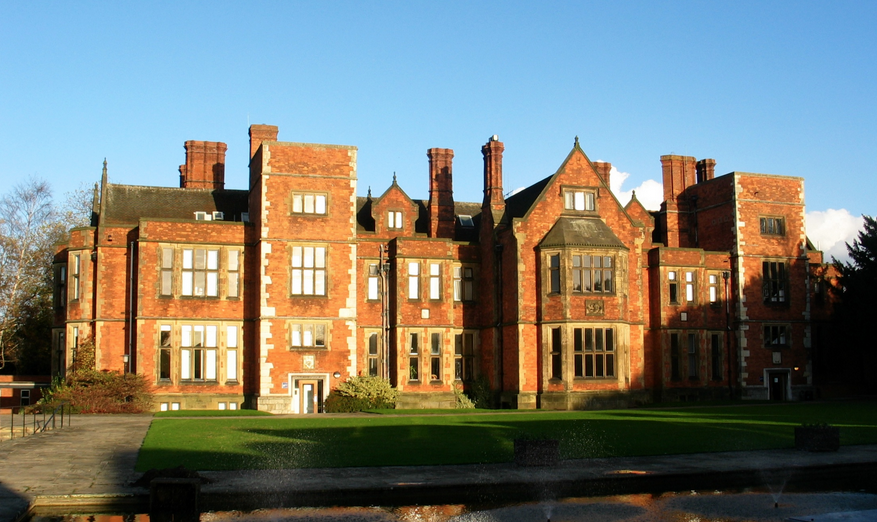 The University of York has issued an apology for having the audacity to observe International Men’s Day. The move comes after feminists complained that the event is not about them.

The original event listing—which has since been removed and replaced with the apology—described International Men’s Day as an holiday dedicated to “highlighting some of the issues that have an adverse impact on equality for men.”

Dr. Adrian Lee, from the University’s Equality & Diversity Committee, wrote, “In the area of gender equality, the focus has rightly been on raising awareness about – and removing barriers for – women. We are, however, also aware of some of the specific issues faced by men.”

The event listing stated men have their own particular “significant“ challenges.

“Boys underperform at school compared to girls," Lee said. "Men are 20 times more likely than women to go to prison; they are much more likely to be victims of violent crime, are more likely to commit suicide and have a lower life expectancy than women. Men are also less likely to access mental health services and other forms of support when they need them. “

In response to the school’s plan to have a day devoted to discussing the real issues impacting men, over 200 people signed an open letter calling insisting the event should be canceled because International Men’s Day is not about women.

The letter reads, “According to its official UK website, ‘International Men’s Day’ exists to raise awareness of global issues facing men and boys, and to ‘celebrate the contribution that men make.’ It does not, however, seek a dialogue on such issues with women’s equality campaigns or initiatives.”

The signers also took offense to the idea that “gender equality is for everyone”—not just women.

“A day that celebrates men’s issues – especially those outlined in the University’s statement – does not combat inequality, but merely amplifies existing, structurally imposed inequalities. The closing remark – ‘gender equality is for everyone’ – echoes misogynistic rhetoric that men’s issues have been drowned out by the focus on women’s rights.”

Activists took to Twitter with the hashtag “#UoYMensDay” to show their discontent over the idea that not everything is about them: 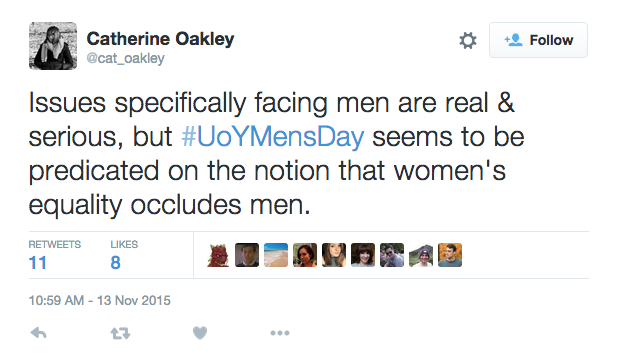 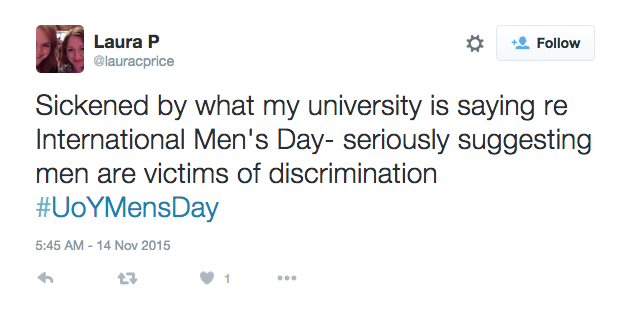 In the typical, eventual apology on the University of York’s website, the school wrote, “The intention was to draw attention to some of the issues men tell us they encounter and to follow this up by highlighting in particular the availability of mental health and welfare support which we know men are sometimes reluctant to access.”

The school also apologized for daring to mention men could potentially have their own problems and stated that, instead, “the main focus of gender equality work should continue to be on the inequalities faced by women.”

Feminist and sociology Ph.D student Anaïs Duong-Pedica, who ironically specializes in suicide (one of the major topics intended to be covered by International Men’s Day), gloated over the news of the observance being canceled: 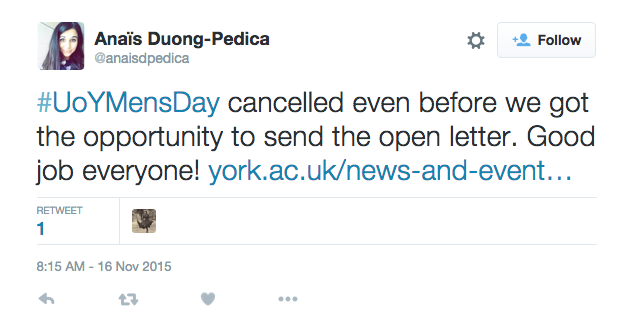 “When 13 a men a day in the UK are dying from suicide, it is essential that everyone in positions of power, trust and influence does everything they can to help men talk about the issues that affect them, and that includes the academic community and student representatives,” Poole said.