The government of the United Kingdom just garnered its first conviction in an “exciting” new field of oppression.

It nailed a man for making a 3-D printed gun.

As AFP reports, in October of 2017, London police invaded the apartment of Tendai Muswere, a 26 year-old student from Zimbabwe studying in England. Searching for marijuana, the police claim they found the components for an evil inanimate object, a 3-D printed gun capable of firing one shot.

Neither AFP, nor The Guardian are clear as to what happened, legally, upon that first discovery. They both observe that Muswere claimed that he had printed the components to use in a dystopian student film, but he did not provide details about the film to police, and, based on subsequent records, Muswere was not prosecuted for the parts.

It was later, in February, when the police revealed that the UK is already a dystopian nightmare.

That’s when they executed a second raid, found a complete gun made from the 3-D printed parts, and arrested Muswere for unlicensed possession of an unregistered firearm. 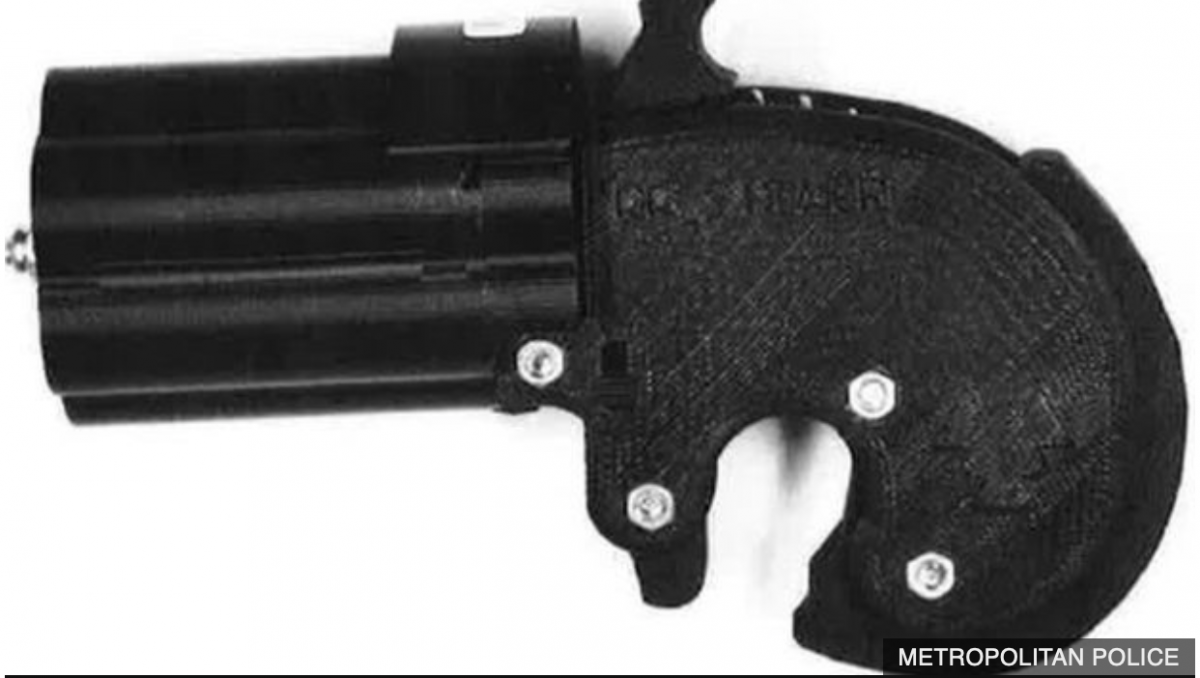 Sure, philosophers such as Thomas Aquinas, John Locke, John Stuart Mill, and many more, have correctly stated that every man has an inherent right to self-defense. Sure, Muswere is a man.

But possession of a firearm is a no-no for collectivists, and collectivists have run the British government for decades.

Collectivists in Britain and elsewhere tell us they want to curb “gun violence”, so they pass statutes to tell law-abiding people that they will be unable to legally own a personal firearm, or to tell them it will be very difficult to do so, seemingly unaware that people with criminal intent are already predisposed to breaching the statutes and could care less, and unaware that, as John Lott has noted, more guns in the hands of individuals is strongly correlated to lower violent crime rates, and the US Centers for Disease Control has shown that gun owners use firearms 3.6 times more often to stop crimes than to engage in them.

And in England, they pay no heed to the results of their gun-grabs, results that have been universally and manifestly disastrous.

So they sent agents of the state to his place to threaten him with their guns, because, of course, the state wants to make sure that people aren’t threatened by people with guns.

Muswere was planning to line the printed firearms with steel tubes in order to make a barrel capable of firing… This conviction, which I believe is the first of its kind relating to the use of a 3D printer to produce a firearm, has prevented a viable gun from getting into the hands of criminals.

Which sounds so impressive and solid. And Muswere was foreign, so, yeah, who cares about his right to self-defense?

But Muswere was not engaged in a crime against another person. Particularly in the case of the second search, he simply owned an inanimate object.

Does the possession of an object bring direct harm to the life or property of another human being? No.

Does possession connote intent? No. As much as people might like to assume so, this is not possible.

And if possession did connote intent, without an indication that the man had engaged in violent crime against another, one would have to base such an approach to the subject on previous statistical information, which, as mentioned earlier, has been revealed by the CDC to show that it’s 3.6 times more likely that someone with a gun will stop a crime than engage in one.

But many politicians and bureaucrats within the British judicial system will applaud this conviction, which saw the man plead guilty to a crime: possession of something the government did not want him to own.

This is not a good precedent. But, even in the US, gun-grabbing politicians might adore it.

Even as many of them travel with armed guards, and employ armed agents of the state to guard their tax-funded temples called “government buildings”.

Perhaps those of us who see this differently might ask them:

If guns are so bad, why don’t they give up all those armed guards?

And we know the answer. This isn’t about safety. It’s about power. And power rests with those who carry the arms.

The existence of an easy way to print and construct a firearm is a direct threat to that kind of hegemonic mentality.

And, as England has shown, the agents of the state are eager to nip it in the bud.