Oliver Cameron was born in the United Kingdom with a large benign tumor on his heart. The tumor, called a cardiac fibroma, “occurs primarily in infants and children, with no numerical disparity by sex,” according to medical reports.

“They couldn’t treat the tumor in the U.K. because they didn’t have any doctors with the right expertise,” his mother, Lydia, told Live Action. “They said our only option was a heart transplant, but we thought there must be another route, so we started doing our own research.”

After researching on their own, they were led to Boston Children’s Hospital where doctors have completed a similar procedure and assured the parents that they could remove baby Oliver’s tumor.

The United Kingdom not only has socialized medicine, but a history of not allowing families to take their babies outside of the country for treatment. Remember the heartbreaking stories of Charlie Gard and Alfie Evans?

“Oliver's cardiologist spent hours of his own time trying to get Oliver to Boston — he kept applying and reapplying for the National Health Service to cover the surgery in the U.S., but with no luck,” Lydia said. 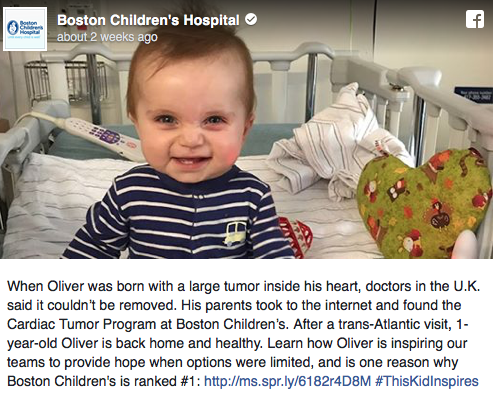 After a lot of pressure from Oliver’s doctor, the National Health Service agreed to send Oliver to the US to get this procedure and it would be paid for by the NHS. They also sent doctors along to learn more about the procedure.

According to IJR, Oliver’s case was different from Charlie and Alfie because there was not “a surgical service in the U.K. with experience of treating this exceptionally rare condition.”

Oliver was in surgery for about eight hours. After that, Lydia was made aware that her son was tumor-free. “Miracles do happen,” she said, “and we are grateful to be celebrating ours.”