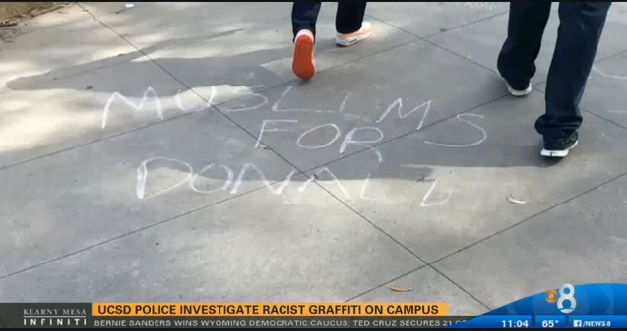 The “racist” language allegedly “targeting Latinos” appears to include the phrases, “TRUMP,” “BUILD THE WALL,” “DEPORT THEM ALL,” “MEXICO WILL PAY,” “TRITONS 4 TRUMP,” “JEWS 4 TRUMP,” “MUSLIMS FOR DONALD,” and “LGBTQQIA LMAO FOR TRUMP.”

According to CBS 8, campus police are investigating the matter because students complained about the “hurtful messages” being written outside of a multicultural center.

In the statement, the chancellors wrote, “This graffiti runs counter to our campus values of equity and inclusion. We value diversity and respect for all cultures.”

In a statement on Facebook, Evans wrote he hopes the matter is treated with the “greatest seriousness” if any code of conduct violation is found.