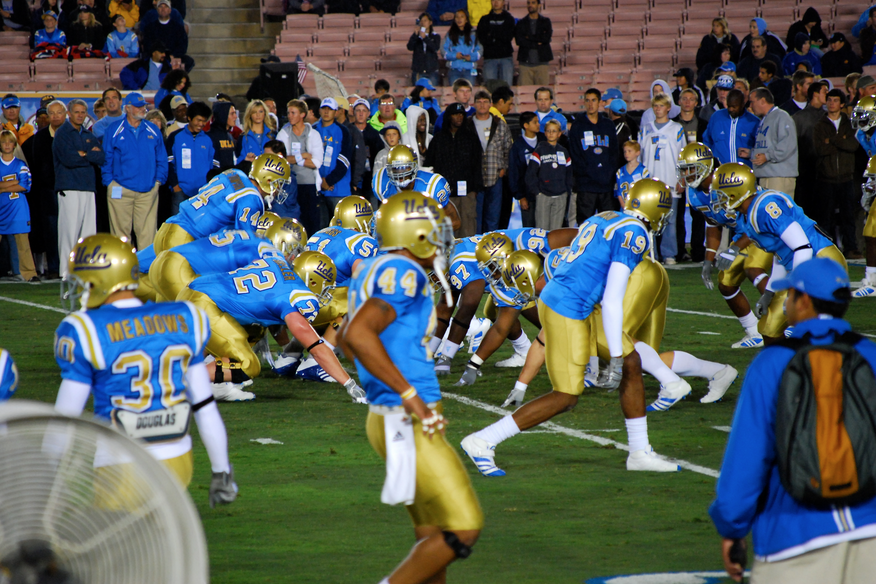 According to one University of California, Los Angeles student newspaper writer, being a college football player is pretty much the same thing as being a slave.

Arthur Wang, the blogging editor for the the Daily Bruin, wrote a column addressing “some concerns” he has about college football “as a newfound spectator”:

It doesn’t take long for me to realize that football is as disturbing for the players as it is intriguing for me. Most students who play for college football teams receive nothing more than the purported glory of representing their school. More than 98 percent of them won’t make it into the NFL. And regardless of going pro, the damage is already done, since a vast majority of them will suffer chronic brain damage that can have ruinous effects on their mental health. No wonder that some fans and sports journalists are telling the NCAA to at least “pay them their goddamn money."

Among “them” are black male athletes, uniquely exploited for their talents by a collegiate sport-industrial complex that gives them next to nothing in return.

This brings to mind the analogy of slavery and sharecropping, though it’s not completely accurate. We witnessed the difference last month when black players on University of Missouri’s football team boycotted both practice and play in solidarity with student protesters decrying poor campus climate there and calling for the president’s resignation. The players helped the protesters get what they wanted, mostly because it would have cost the university millions to cancel an upcoming game with Brigham Young University.

Wang even admits that his slavery analogy is imperfect because football players at the University of Missouri, for instance, were able to create a “powerful demonstration of influence”:

As noted by The Nation, this impromptu organized labor effort was a powerful demonstration of the influence in black labor on college campuses, a remarkable flipping of an American historical script that has consistently exploited and abused blacks for its economic development rather than acknowledged its importance.

However, Wang continues his slavery comparison by implying the alleged poor treatment of college football players is indicative of a bigger cultural problem in America (that involves, of course, white privilege):

Where the script hasn’t changed from the antebellum era, however, is how criminally undervalued black labor remains in multiple arenas of American life, and how football is a highly visible arena of this. Blacks have received little, if any, serious recognition for how their involuntary and unpaid labor contributed to the United States’ rise as a modern economic superpower. Similarly, they – along with their fellow athletes of all backgrounds – are not compensated for their labor on university campuses that entertain millions of Americans, most of them white and many of them privileged enough to have the leisure time to watch black men smack into each other in mega-sized, gladiator-esque arenas. To add insult to injury, black Americans are criticized for developing an interest in athletics that they are socialized to cultivate.

Wang finishes off his column with a bit of snark about America’s attitude towards football:

Big plays, big injuries, big money: This is football. The only thing that’s bigger is the exploitation and the injustices innate to its modern commercialization – perhaps that’s what makes football so American.

Earlier in the article, Wang confesses his interest in football is less about the sport, more about the data and statistics. Perhaps, Wang should stick to just playing with the numbers instead of trying to philosophize about what makes something “American.”

Other brilliant columns by Wang include: