Ever a beacon of free speech and the open sharing of ideas, Twitter flagged a pro-life video montage showing nothing but clips of ultrasounds and innocent babies as “sensitive,” putting it in the same category as sexual, violent or hateful content.

The short video, published and promoted by Pro-Life Voices For Trump, shows a collection of mothers holding their babies dubbed over by clips from President Trump speaking on the sanctity of unborn life.

“Life is the greatest miracle of all. We see it in the eyes of every new mother who cradles that wonderful, innocent, and glorious newborn child in her loving arms," Trump says in the video, before going on to correctly explain that every major Democrat still in the running for president has a record of supporting abortion up until the moment of birth.

"Let us work together to build a culture that cherishes innocent life," the video concludes.

We see it in the eyes of every new mother who cradles an innocent newborn child in her loving arms:

Life is the greatest miracle of all.

The Washington Free Beacon screenshot the tweet, which includes a warning from Twitter telling users that the video “may contain sensitive material.” 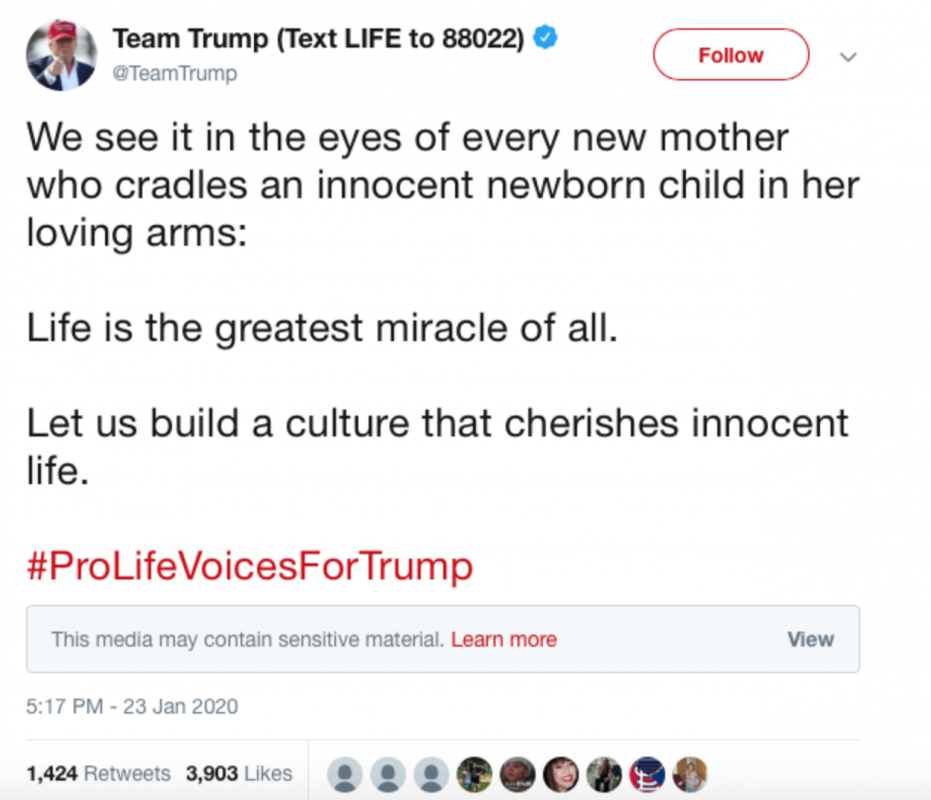 "Our aim is to limit exposure to sensitive images and videos and to prevent the sharing of potentially disturbing types of sensitive media," the social media giant explains.

This isn't the first time Twitter has made a move against pro-lifers or their message, however innocent. The social media platform has long rejected paid ads by pro-life advocacy group Live Action while still running ads from abortion giant Planned Parenthood.