The Twitter exec now in charge of heading up the site's new “fact-check” effort isn’t exactly the president’s biggest fan.

And by that, I mean he once called Trump an “actual Nazi” and a “racist tangerine," among other things.

Twitter recently began "fact-checking" claims on its site regarding the coronavirus, weeding out anything the subjectively deem to be "misleading," labeling certain tweets as "potentially untrue." The social media giant then followed that up by adding a “get the facts” link to tweets from Trump that they determine are misleading or even outright untrue.

Yoel Roth, who's ironically listed in his own bio as Twitter's "Head of Site Integrity" defended the move to begin policing "information" on Twitter, saying, “Our goal is...to limit the spread of potentially harmful & misleading content."

But Roth himself has a long history of displaying anti-Trump, and general anti-Republican, sentiment. Here are just a few examples: 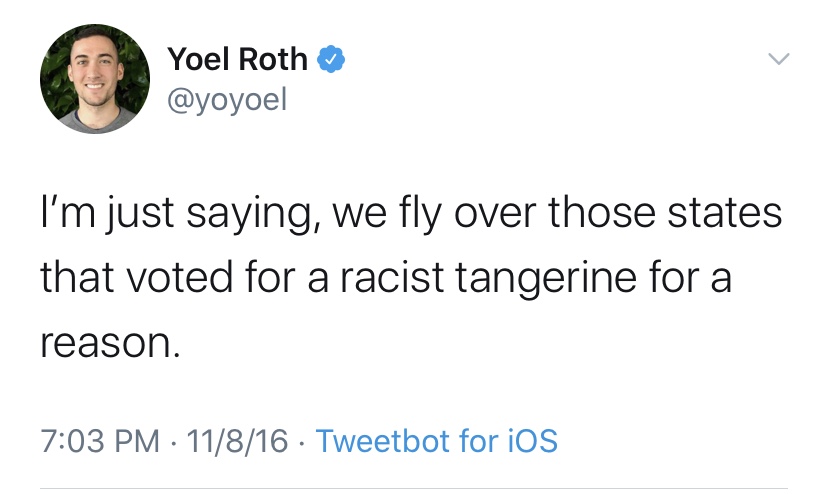 In addition to insulting Trump, tweeting from anti-Trump rallies and bragging about having donated to Hillary Clinton’s campaign, Roth also channeled his inner 9-year-old boy by once calling Senate Majority Leader Mitch McConnell a “personality-free bag of farts.”

But, lest progressives get super excited about Roth's anti-Trumpism as he stands at the helm of Twitter's new Truth Machine, keep in mind that Republicans aren't the only targets of Roth's mud-slinging.

The Twitter "Head of Site Integrity" has also picked on "trannies," for what it's worth.