Wednesday night, protesters were reportedly blocking the interstate in response to the death of Keith Lamont Scott, a black man who was shot and killed by a black police officer on Tuesday.

In response to the protest, Glenn Reynolds, a University of Tennessee law professor known for his blog, Instapundit, tweeted motorists should “run them down”: 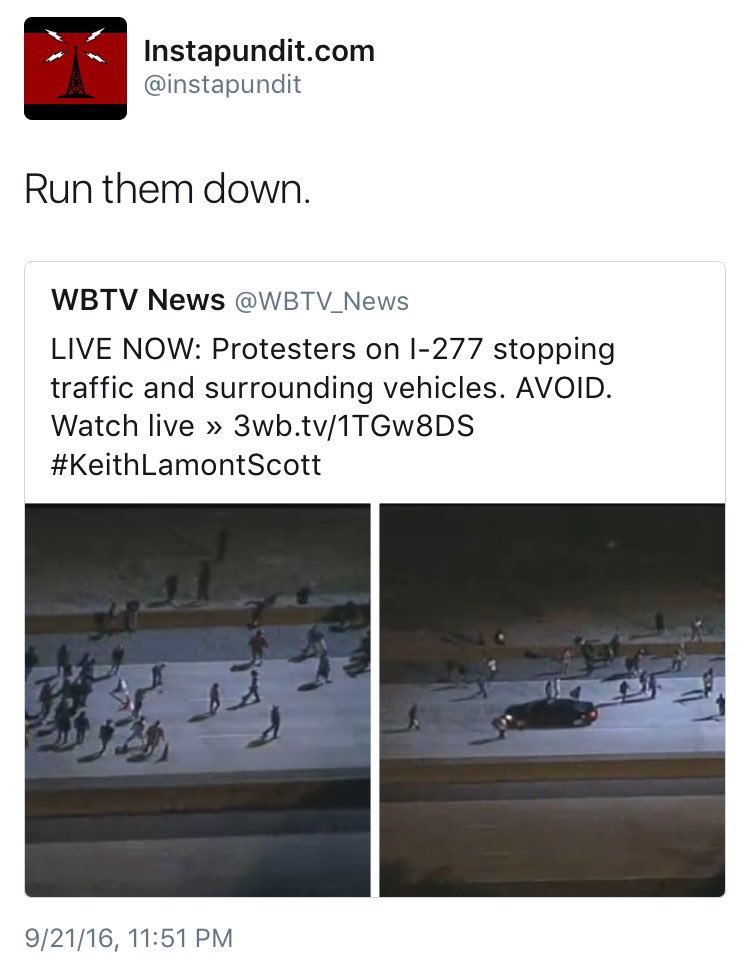 Reynolds addressed his suspension and defended his “run them down” comment on Instapundit:

“Sorry, blocking the interstate is dangerous, and trapping people in their cars and surrounding them is a threat. Driving on is self-preservation, especially when we’ve had mobs destroying property and injuring and killing people. But if Twitter doesn’t like me, I’m happy to stop providing them with free content.”

In an update, he added:

But riots aren’t peaceful protest. And blocking interstates and trapping people in their cars is not peaceful protest — it’s threatening and dangerous, especially against the background of people rioting, cops being injured, civilian-on-civilian shootings, and so on. I wouldn’t actually aim for people blocking the road, but I wouldn’t stop because I’d fear for my safety, as I think any reasonable person would.

“Run them down” perhaps didn’t capture this fully, but it’s Twitter, where character limits stand in the way of nuance.

Meanwhile, regarding Twitter: I don’t even know that this is why I was suspended, as I’ve heard nothing from Twitter at all. They tell users and investors that they don’t censor, but they seem awfully quick to suspend people on one side of the debate and, as people over at Twitchy note, awfully tolerant of outright threats on the other.