It doesn’t really matter whatever you might think about Infowars or its founder Alex Jones. You can hate him. You can love him. You can publicly say he’s completely full of crap. But one thing that can’t be denied is the left's role in squashing the same freedom of the press that they constantly complain President Trump attacks. 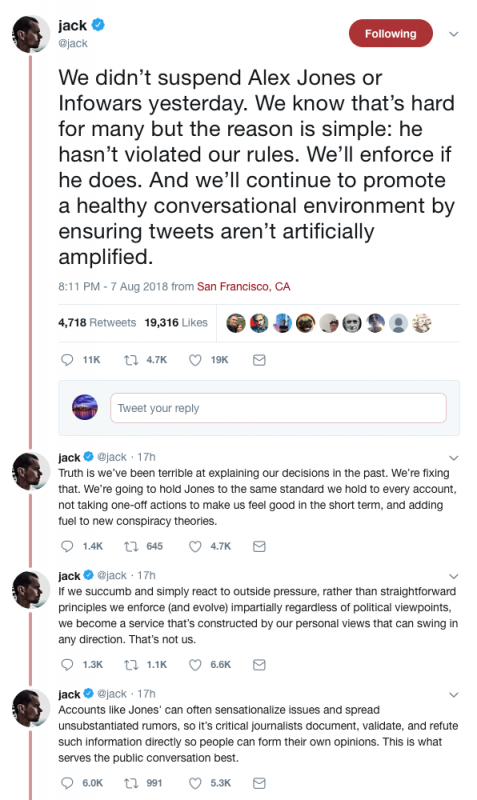 Seems perfectly reasonable to me. It’s not like his company coordinated with other social media companies to get rid of Jones while most of the U.S. was still sleeping. Oh, that’s right. That was Facebook, Apple, YouTube and Spotify.

Here’s one of their responses: 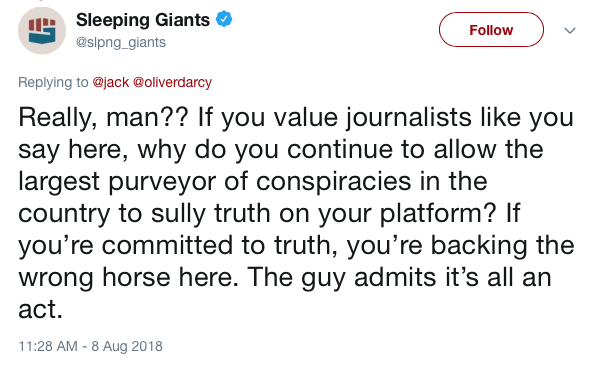 Notice the red, white and blue Socialist fist in their profile picture? Yeah, that’s the first thing I noticed, too. Besides that, if Jones “admits it’s all an act,” then what are the people praising Jones banishment so scared of? Is it because Jones typically has no filter when he calls out and sensationalizes Leftist views?

It could just be as simple as they don’t have enough of a backbone to handle speech they don’t agree with. I’ll go with that one.

As for Sleeping Giants, they describe themselves on Facebook as “an organization dedicated to stopping racist, sexist, homophobic, xenophobic and anti-semitic news sites by stopping their ad dollars.”

Basically, "If we disagree with you, we’ll do anything we can to take away your livelihood." Sleeping Giants was one of the major “movements” in 2017 that attacked Breitbart in order to cost them ad revenue, where a media organization makes a good portion of its money.

Dorsey even received backlash from a former employee, Emily Horne. 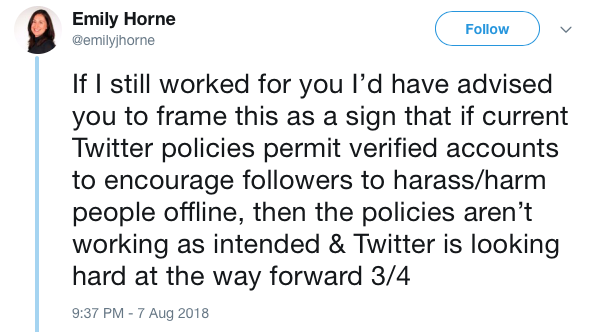 Okay, but Horne doesn’t still work for Dorsey, so what’s her point? Maybe she’s saying that because Jones apparently isn’t in violation of Twitter’s terms of service that Dorsey should revise them in order for Jones to become in violation.

These are the same kind of people that wouldn’t mind if the Constitution was changed.

Dorsey needs to stand his ground, but if Jones actually does violate terms of service than he should be banned based on those terms, not based on politics. But, at least Dorsey had the wherewithal to not be one of the sheep that flocked to ban Jones across most of big social media in the first place.