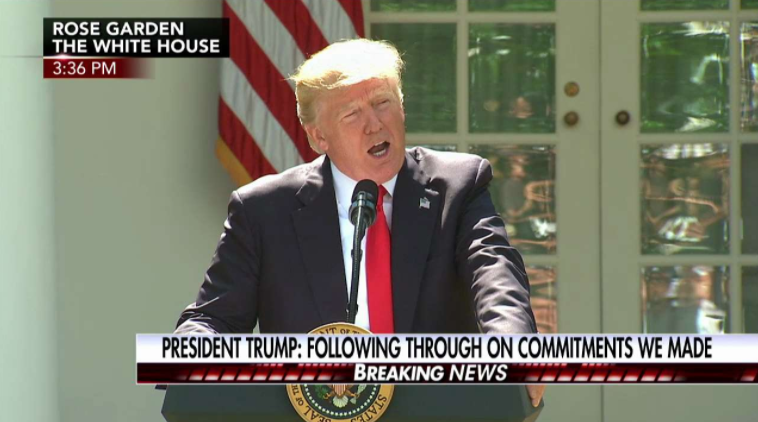 President Trump on Thursday announced from the White House Rose Garden that the U.S. will withdraw from the Paris climate agreement.

He left the door open by saying that he is open to re-entering the agreement -- but under his terms.

“In order to fulfill my solemn duty to protect America and its citizens, the United States will withdraw from the Paris climate accord,” said Trump, “but begin negotiations to reenter either the Paris accord or a really [an] entirely new transaction with terms that are fair to the United States, its businesses, tis workers, its people, its taxpayers.”

“So we’re getting out, but we will start to negotiate and we will see if we can make a deal that’s fair,” he said.

“As President I can put no other consideration before the well-being of American citizens,” Trump went on. “The Paris climate accord is simply the latest example of Washington entering into an agreement that disadvantages the United States to the exclusive benefit of other countries, leaving American workers who I love and taxpayers who absorb the cost…”

The President said that the agreement would result in 2.7 million lost jobs by 2015.

“Believe me, this is not what we need,” he said.

Trump argued that it is in America's economic interest to leave the current agreement as it stands.

The effort is being led by Environmental Protection Agency Administrator Scott Pruitt.

The decision was not supported across the board among Republicans.

Republicans such as South Carolina Sen. Lindsey Graham opposed exiting the agreement, worried that doing so sends the wrong message that the party wholly denies the existence of climate change.

The global accord was reached in 2015. Then-President Obama signed the agreement via executive order in 2016.

The accord mandates major reductions in carbon emissions, which President Trump has opposed as harmful to U.S. jobs.

Trump on climate deal: “We’re getting out, but we will start to negotiate" and see if we can reach another deal https://t.co/gjkK6NZnb8