Trump to UN: ‘We Will Have No Choice But to Totally Destroy North Korea’ 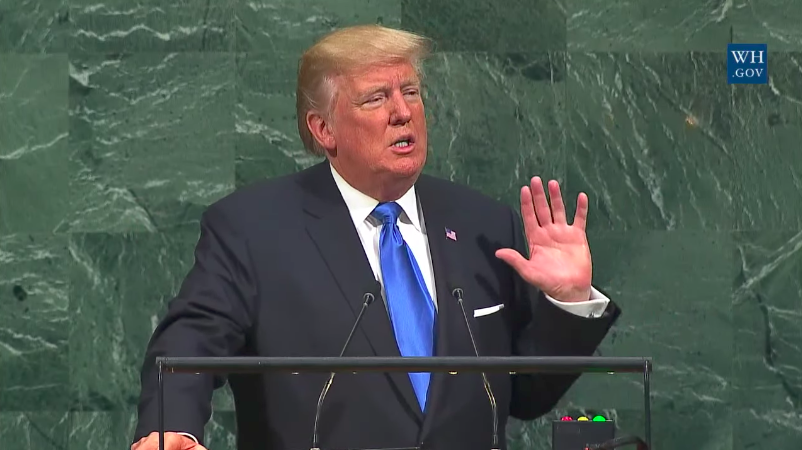 President Trump in his first address to the United Nations General Assembly on Tuesday laid out his “America First” vision of foreign affairs and called on other nations to join the U.S. in standing up to the international threats of North Korea and Iran.

Trump said that if North Korea continues its provocations and forces military action, the U.S. “will have no choice but to totally destroy North Korea.”

“The United States has great strength and patience, but if it is forced to defend itself or its allies, we will have no choice but to totally destroy North Korea,” he said.

He called North Korean Kim Jong Un “rocket man” for his missile program, saying that he is “on a suicide mission for himself and for his regime.”

“The United States is ready, willing and able, but hopefully this will not be necessary,” said Trump.

“It is time for North Korea to realize that the denuclearization is its only acceptable future,” he said.

The President thanked China and Russia for joining the recent UN Security Council vote to impose new sanctions on North Korea following yet another missile launch over Japan.

Trump also criticized Iran, its open disdain for the United States, its nuclear aspirations, and its support for terrorist organizations that work to undermine peace throughout the Middle East.

“We cannot let a murderous regime continue these destabilizing activities while building these dangerous missiles and we cannot abide by the agreement if it provides cover for the eventual construction of a nuclear program,” he said.

“The Iran deal was one of the wort and most one-sided transactions the United States has ever entered into,” he continued. “Frankly I think that deal was an embarrassment to the United States and I don’t think you’ve heard the last of it…”

“It is time for the entire world to join us in demanding that Iran end its pursuit of death and destruction,” the President added.

He stressed the importance of respecting sovereignty of all countries and slammed North Korea and Iran for not abiding by that principle.