President Trump has been busy tweeting out his thoughts on reports that the FBI placed spies within the Trump campaign during the 2016 presidential election.

“SPYGATE could be one of the biggest political scandals in history!” Trump tweeted Wednesday morning.

“Look how things have turned around on the Criminal Deep State. They go after Phony Collusion with Russia, a made up Scam, and end up getting caught in a major SPY scandal the likes of which this country may have never seen before! What goes around, comes around!” the president tweeted.

The tweet come on the heels of multiple reports that Stefan Halper approached Trump campaign aides in the summer of 2016 in an attempt to glean information on collusion with Russia for an FBI operation, named "Crossfire Hurricane". 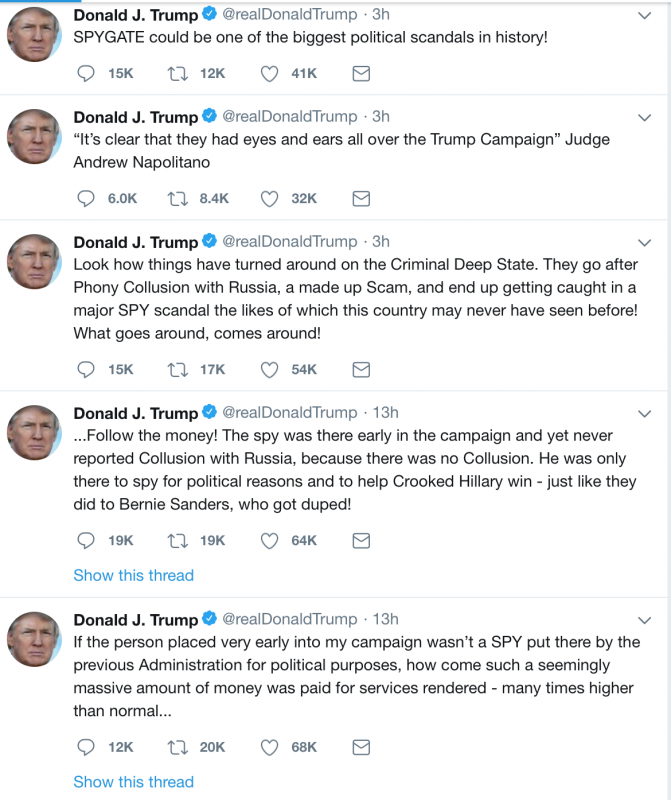 Some reports claim that Halper was paid hundreds of thousands of dollars by Obama administration officials for spying on the Trump campaign.

Without mentioning Halper by name, President Trump tweeted about the situation.

“…Follow the money! The spy was there early in the campaign and yet never reported Collusion with Russia, because there was no Collusion. He was only there to spy for political reasons and to help Crooked Hillary win – just like they did to Bernie Sanders, who got duped!” Trump tweeted.