Donald Trump's social media troll game has got to be considered expert level at this point.

The president took to Twitter Friday morning to respond to actor/moron Alec Bladwin’s comments during his Thursday interview with the Hollywood Reporter about how playing Trump on Saturday Night Live (SNL) is “agony.”

Every time I do it now, it's like agony. Agony. I can't. If things don't go in the right direction for the midterms. … I could go out on the street, stand on any corner and tap 10 people on the shoulder. And all 10 of them, in all likelihood, would be more qualified — ethically, morally, intellectually and spiritually — than Trump. I'll vote for Mitt Romney. I don't care. Anybody over this guy. It doesn't matter. We have to get rid of him. And that's another project I'm working on. I was the keynote speaker at the Democratic Dinner in Iowa, and I'm gonna go do a couple more of those this year. My wife and I agreed that we're gonna give it everything we have. And then if, God forbid, he wins again in 2020, I'm wondering can I host a game show in Spain.

Some one sound like he’s coming unhinged. Although — to be fair — Alec Baldwin’s been unhinged for a long while now.

Is it really “agony” when you get paid very good money to do an exaggerated impression of someone you literally hate?

Not one to let an opportunity to talk smack go to waste, Trump sent out a tweet Friday morning in response to Baldwin’s “agony” comment. 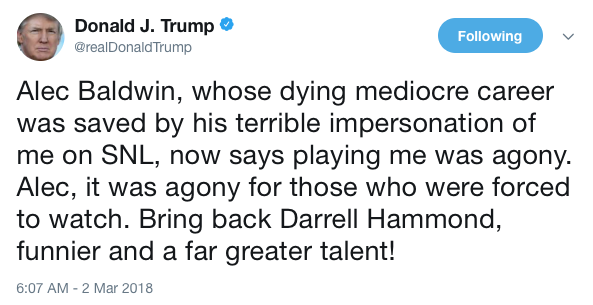 Trump actually makes a really good point by saying that SNL Announcer Darrell Hammond should come back to the cast and reprise his old ownership of the Trump character. Hammond is much better at impressions than Baldwin. Heck, Hammond made his way on SNL back in the day because of all of the spot-on impressions he can do.

Not only that, but for Trump to not only trash Baldwin’s portrayal of him — but also to trash the dude’s entire career — is a lesson in savagery.

Speaking of Baldwin, the man is so unhinged that he used his charity’s Twitter page to respond to Trump’s tweet. Baldwin and his wife Hilaria run the ABFoundation which supports “the arts + artists, amateur + professional.” 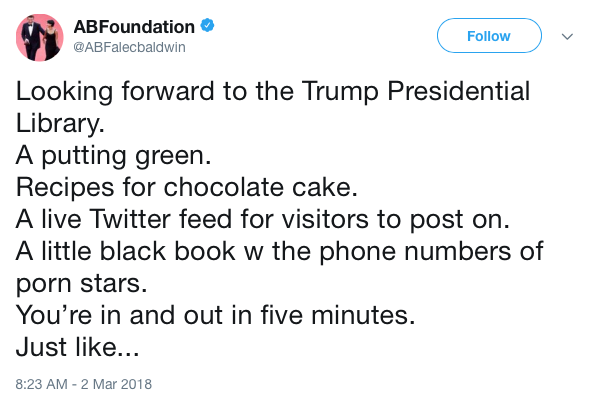 I guaran-damn-tee all of you that if Trump ever brought up Baldwin’s wife like he did to Trump, we would be able to hear Baldwin’s head blow up larger than it already is. Baldwin would have a field day and call out the president and utter so many expletives that the bleeps from the censors would make it sound like a fleet of trucks were backing up.

I guess the liberal mantra of “when they go low, we go high” is out the window.