Trump: ‘They Say a Wall is ‘Medieval’ – Well, So is a Wheel’ and They Both Still WORK

President Trump paid a visit to McAllen, Texas, on Thursday and again defended the need for a wall on the U.S.-Mexico border.

Trump during a roundtable discussion with lawmakers and local officials in McAllen pushed back against his critics who say walls are “medieval” and obsolete. He compared the concept of a border wall to the invention of the wheel, joking that the wheel is “older” than border walls and are still effective even to this day:

They say ‘a wall is medieval.’ Well, so is a wheel. A wheel is older than a wall. And I looked, and every single car out there — even the really expensive ones the Secret Service uses — [and] I said, ‘Do they all have wheels?’  'Yes.' 'Oh. I thought it was medieval.'

"The wheel is older than the wall,” he continued. “You know that? There are some things that work. A wheel works and a wall works."

"They say a wall is medieval—well, so is a wheel," Pres. Trump says at meeting near southern border. "A wheel is older than a wall."

"There are some things that work, you know what? A wheel works, and a wall works." https://t.co/1QHVGTRFOZ pic.twitter.com/Vgs87esAmz

Ironically enough, CNN’s Jim Acosta unwittingly admitted to that fact on Thursday when he visited McAllen, Texas, as MRCTV reported, where he said while standing next to a physical barrier that he didn’t “see anything resembling a national emergency situation.” We wonder why.

Trump went on to blame Democrats for the ongoing government shutdown, adding that his border security proposal involves “more than just walls.”

“Their open borders agenda threatened all American families including millions of legal immigrants throughout our nation,” he said.

Ahead of his trip to Texas Trump tweeted that he had an unsuccessful meeting with Democratic leaders on Wednesday who again refused to budge on his request for $5.7 billion to construct the wall. 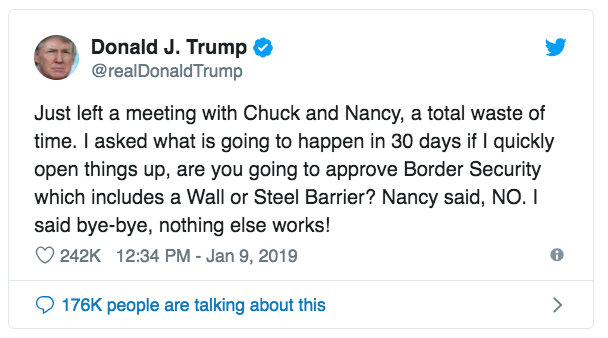 The proposal crafted by the Department of Homeland Security (DHS) includes the funding for the physical barrier, as well as several other border security measures which the president discussed during his first-ever Address to the Nation on Tuesday.