President Donald Trump tweeted early Wednesday regarding a tense moment between armed Mexican troops and a pair of U.S. soldiers earlier this month, warning that such a stand-off “better not happen again” and slamming Mexico for “not doing nearly enough in apprehending & returning” illegal aliens crossing into the United States unlawfully before saying he's sending even more U.S. military to the border. 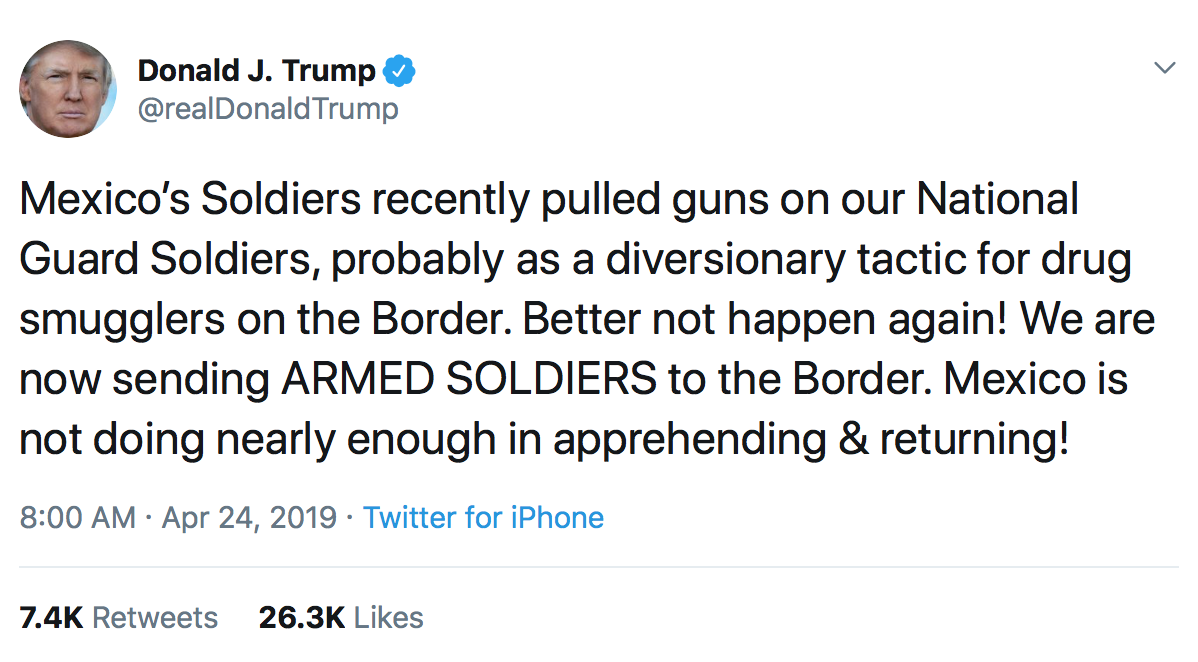 “Mexico’s Soldiers recently pulled guns on our National Guard Soldiers, probably as a diversionary tactic for drug smugglers on the Border,” Trump tweeted. “Better not happen again! We are now sending ARMED SOLDIERS to the Border. Mexico is not doing nearly enough in apprehending & returning!”

According to the report, the Mexican authorities disarmed one of the two U.S. soldiers, tossing his weapon in the back of the U.S. Customs and Border Protection vehicle, before questioning them at gunpoint. U.S. Northern Command officials added the soldiers allowed their questioners to take their weapons “in an attempt to de-escalate a potential volatile situation,” saying they “followed all established procedures and protocols.”

Officials claimed the Mexican troops mistakenly thought the Americans were on the wrong side of the U.S. border, as the encounter occurred in a brushy, unmarked area south of the border fence but north of the Rio Grande.

The situation eventually diffused after one of the American soldiers, who spoke some Spanish, was able to explain to the Mexicans that they were on the U.S. side of the border.

So far, there are about 3,000 U.S. military troops and another 2,000 National Guardsmen deployed to the Southwest border to support border security efforts.