Trump Slams Clinton: ‘We Can’t Fix a Rigged System By Relying on the Very People Who Rigged It’ 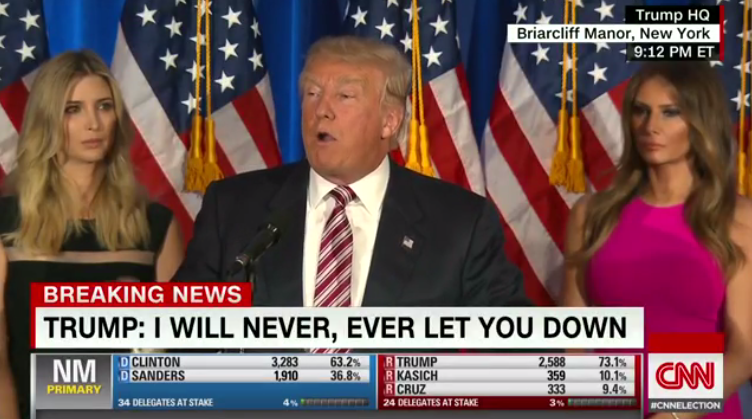 Donald Trump won the final contests of the 2016 primary season on Tuesday—taking Montana, South Dakota, New Mexico, New Jersey, and California—marking the beginning of a new chapter in his arguably bumpy journey toward the general election in November.

The presidential hopeful delivered a victory speech at his golf course in Briarcliff, N.Y., Tuesday night.

“Tonight we close one chapter in history and we begin another,” Trump began.  Our campaign received more primary votes than any GOP campaign in history… That’s a great feeling.”

He thanked his supporters and made an appeal to Sanders’ supporters to join the Trump campaign:

“To those who voted for someone else in either party, I will work hard to earn your support,” said Trump. “To all of those Bernie Sanders voters who have been left out in the cold by a rigged system of superdelegates... We welcome you with open arms.”

He argued that he only beat “a rigged system” by winning with overwhelming support, and that Americans cannot expect things to change by electing yet another politician “who created our problems.”

“I beat a rigged system by winning with overwhelming support… That’s the only way to beat it,” said Trump. “We can’t fix the rigged system ... by relying on the very people who rigged it.”

“Do not ever think anything differently,” he went on. “We can’t solve our problems by counting on the politicians who created our problems. The Clintons have turned the politics of personal enrichment into an art form for themselves. They’ve made hundreds of millions of dollars selling access, selling favors, selling government contracts… Secretary Clinton even did all of the work on a totally illegal, private server.”

“How she’s getting away with this, folks, nobody understands,” he added.

Trump announced that he would be delivering "a major speech" next week focused on the conduct of Hillary Clinton and her husband and former U.S. president Bill Clinton.

Check out a video clip from his speech below.

Donald Trump announces he will be giving a "major" speech about the Clintons next week https://t.co/M9IkFWe6Zt https://t.co/uRx3xI6if8