Wrapping up a two-day trip to California, President Trump on Wednesday paid a visit to the U.S.-Mexico border in Otay Mesa, San Diego, to discuss progress being made with his border wall.

Trump praised the newly built, 18-foot-tall steel border replacement wall in Otay Mesa as formidable and “impenetrable,” adding that it was "designed to absorb heat" and deter trespassers.

President Trump - 🔥Hot Wall🔥
"It's designed to absorb heat so its extremely hot you wont be able to touch it. You can fry an egg on that wall. It's very very hot." #BuildTheWall pic.twitter.com/JaqSsoxmJc

When asked by reporters about his promise to make Mexico pay for the wall’s construction, Trump said that he could impose tariffs but Mexico is paying with its "tremendous cooperation" in sending 27,000 troops to the border to help stem the flow of migrants.

Following the press conference, in quintessential Donald Trump fashion, the President pulled out a sharpie and signed one of the posts of the border replacement wall.

At invitation of the construction personnel, Pres Trump pulls out a Sharpie and signs one of the posts of the border wall. Other officials follow suit. pic.twitter.com/fbDWWgXQrj

While many on Twitter had only negative things to say about the event, labeling the wall a vanity project (surprise, surprise), CNN correspondent Betsy Klein tweeted that one of the construction workers at the sight told her signing the wall is actually a tradition.

According to The San Diego Union-Tribune, "24 miles of new and secondary wall have been added to the location since the president visited prototypes in San Diego over a year ago." 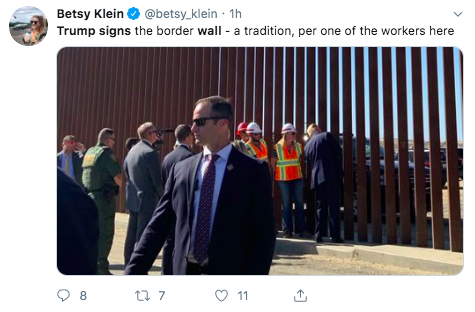