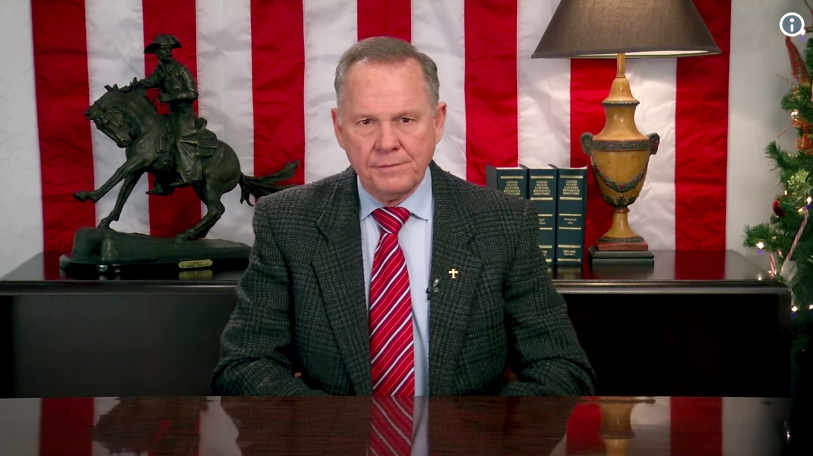 "I think he should [concede]," Trump said at the White House before his departure to deliver remarks at the FBI National Academy in Quantico, Va.

"He tried," he continued. "I always want to support the person running. We need the seat. We'd like to have the seat.. But as far as Roy Moore, yeah, I would certainly say he should."

.@POTUS: "There is absolutely no collusion. I didn't make a phone call to Russia. I have nothing to do with Russia. Everybody knows it. That was a Democrat hoax. It was an excuse for losing the election." pic.twitter.com/nGgSntY5W8

Moore, who has been accused by several women of sexual misconduct, refused to concede on election night, saying that he would wait for every last vote to be counted.

He hoped to come within half a percentage point of Jones which would trigger an automatic recount of the vote.

Jones finished more than 20,700 votes ahead of Moore with a margin of 1.5 percentage points.

Moore issued a campaign statement a day after the election, saying that he is still waiting for the official vote count from Alabama Secretary of State John Merrill, who has said that it is “very unlikely” Jones would not be certified as the winner, The Washington Post reports.

In his statement, Moore says that he is going to continue to fight "for the future of our country" as “immorality sweeps over our land.”

He again denies the sexual misconduct allegations against him as “baseless and false,” merely a product of a corrupt political process, he said.

I want to thank all of you who have stood with me in this very important battle for the future of our country. https://t.co/NOlh7N7BiP

Many Republicans were relieved that Moore lost the election.

Trump disagreed with Republicans who said they were happy Jones won because he wishes the GOP would have gotten the Senate seat, but said that he knew Moore would not be able to win.