Trump Fires Back at London Mayor Sadiq Khan for Hurricane Criticism: 'Stay Out of Our Business!'

London Mayor Sadiq Kahn talks a lot of trash for someone who worries more about offensive tweets than actually helping the people of London. Last year, London overtook New York City for a period of time when it came to murders within their respective cities. Because Khan doesn’t seem to know when to pick and choose his battles, U.S. President Donald Trump decided to put Khan in his place on Tuesday.

Over the weekend, Khan openly criticized Trump to POLITICO for “dealing with a hurricane out on the golf course.” The hurricane in question is Hurricane Dorian, which is still moving slowly up the Atlantic coast of the U.S.

Following Trump sending Vice President Mike Pence to Poland in his place to commemorate the 80th anniversary of the beginning of World War II, so that the president could focus on the hurricane, Khan was asked about Trump’s absence.

“He’s clearly busy dealing with a hurricane out on the golf course,” Khan said.

During an appearance on “Fox News Sunday,” acting Federal Emergency Management Agency (FEMA) Administrator Pete Gaynor said that his office has been in constant contact with Trump about Hurricane Dorian.

“Daily, hourly," Gaynor said, according to Fox Business. "If I’m not talking to his staff, we’re talking to him. We did a VTC [video teleconference] to Camp David yesterday. We were in his office, the Oval Office a couple of days ago. The vice president is involved; the entire staff is involved. He has his finger on the pulse.”

Not one to back down from pretty much anything Khan says about him, the president took to Twitter Tuesday morning to take a swipe of his own at Khan.

Here are Trump’s tweets to and about Khan: 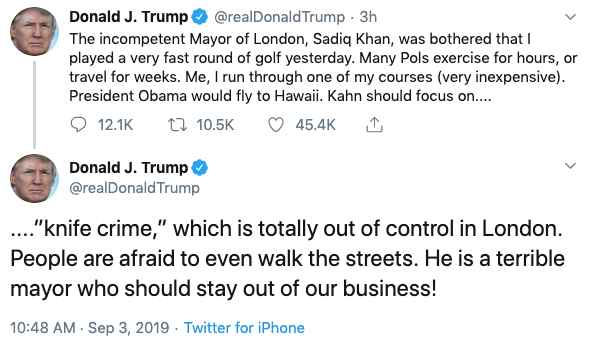 Trump also called out Khan in June for the violence in London, calling the mayor a “disaster” and a “national disgrace.”