You don’t have to be a fan of President Trump to recognize the levity the man puts forth during some of his speeches. But — if you’re all aboard the Trump train — you’ll definitely appreciate the candor that Trump delivered to the crowd Monday evening during a visit to South Carolina.

Let’s just say that the late-night talk show hosts will have plenty of material for their Tuesday night monologues, courtesy of the President of the United States.

Trump basically did five minutes of stand-up comedy about how bad the big three network’s late-night hosts have become, with the impetus being Jimmy Fallon’s apology for humanizing the president a couple of years ago when Trump allowed Fallon to play with his hair.

“I go on the show [“The Tonight Show Starring Jimmy Fallon”]. I agree, ‘Do whatever you want with my hair. Go ahead. Let’s go.’ Trump said. “That was it. Like, what is it? A year-and-a-half, two years later? He’s now apologizing, because he humanized me.”

Perhaps the best line Trump said during the clip was when he asked the question, "Honestly, are these people funny?"

Typically? No, Mr. President. They have their moments, but that's when they're not talking politics - which is rare these days.

Here’s the “Be a man” tweet to Fallon Trump referenced during his speech: 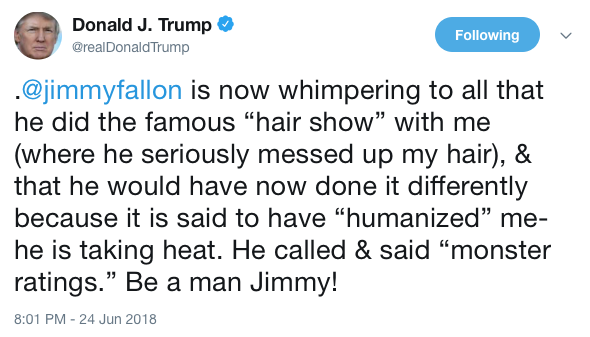 In response to Trump’s tweet, Fallon tweeted that he would make a donation to RAICES in Trump’s name. For those that don’t know, RAICES [Refugee and Immigrant Center for Education and Legal Services] is “the largest immigration legal services provider in Texas,” according to the organization’s website.

Hey, how did it go for actress Mila Kunis when she made all of those Planned Parenthood donations in Vice President’s Mike Pence’s name? Oh, that’s right. Jim Beam faced a large boycott because of Kunis’ “wokeness.”

Just for context, here’s the clip of Fallon messing up Trump’s hair:

They look like they had fun, didn’t they? Fallon certainly looked like he had fun. It’s rare to see a man act like a giddy, teenage girl who met their favorite pop star, but I digress. Fallon really seemed to enjoy what has now become a historic moment in television history.

If I’ve said it once, I’ve said it a million times. Stop apologizing for things that don’t merit an apology. Don’t let the outrage police dictate how you live your life. Apologies are for instances where actual acts of contrition are warranted, not for having a good time on a television show.