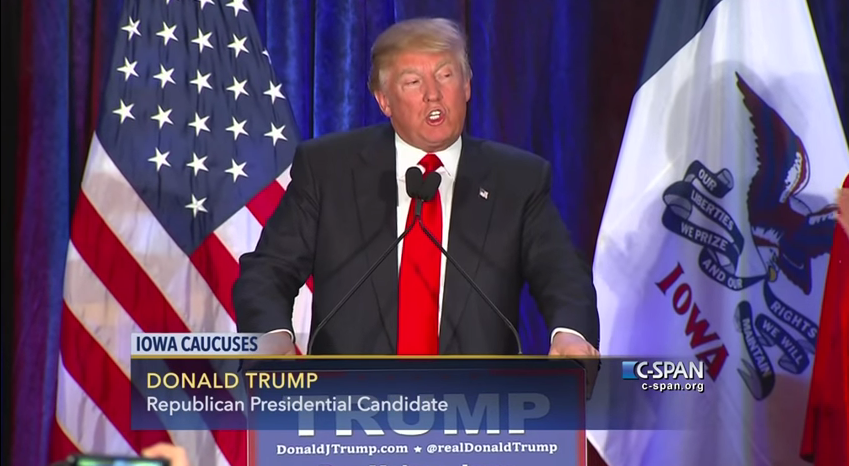 Trump, who placed second in the Iowa Caucus despite polls indicating he would win, took to Twitter to attack Cruz and his campaign.

In a tweet that has reportedly now been deleted, Trump accused Cruz of “illegally” stealing the election. Shortly after, Trump posted another tweet claiming Cruz merely “stole” Iowa, which he deemed “bad”:

Ted Cruz didn't win Iowa, he stole it. That is why all of the polls were so wrong and why he got far more votes than anticipated. Bad!

During primetime of the Iowa Caucus, Cruz put out a release that @RealBenCarson was quitting the race, and to caucus (or vote) for Cruz.

Many people voted for Cruz over Carson because of this Cruz fraud. Also, Cruz sent out a VOTER VIOLATION certificate to thousands of voters.

The Voter Violation certificate gave poor marks to the unsuspecting voter(grade of F) and told them to clear it up by voting for Cruz. Fraud

Trump stated Cruz lied about his position on health care in order to sway voters, despite Trump claiming he supports government health care and despite the fact that he has praised socialized medicine in Europe:

And finally, Cruz strongly told thousands of caucusgoers (voters) that Trump was strongly in favor of ObamaCare and "choice" - a total lie!

Based on Cruz’s “fraud,” Trump announced he believes there should be a “new election”:

Based on the fraud committed by Senator Ted Cruz during the Iowa Caucus, either a new election should take place or Cruz results nullified.

Trump’s accusations against Cruz come after Trump said he was “honored” by his placing in Iowa. He also offered his congratulations to Cruz.

The move also comes after Trump accused voters of not appreciating the fact he is self-funding his campaign.