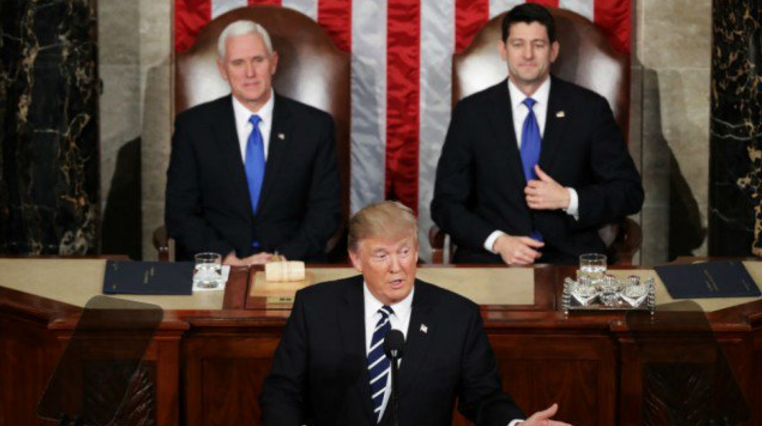 President Trump during his address to Congress Tuesday night discussed his administration’s goal to “demolish and destroy ISIS.”

He strongly condemned ISIS as “a network of lawless savages that have slaughtered Muslims and Christians and men and women and children of all faiths and all beliefs.”

Trump noted how one of his first actions as president was to direct the U.S. Department of Defense to come up with a plan to defeat ISIS.

While the details of the plan remain classified, Trump said that the U.S. will be working with its allies in a global effort to “extinguish this vile enemy from our planet.”

“We will work with our allies – including our friends and allies in the Muslim world – to extinguish this vile enemy from our planet,” he said.

Trump with a STRONG statement on taking out ISIS. #jointaddress pic.twitter.com/CYZDDot0Ss

Unlike President Obama, President Trump was not afraid to utter the words, "radical Islamic terrorism," during his speech.

He defended his executive order on immigration that temporarily halted travel from seven predominantly Muslim countries with connections to terrorism, saying that it is "reckless" to allow "uncontrolled entry from places where proper vetting cannot occur."

“It is not compassionate, but reckless, to allow uncontrolled entry from places where proper vetting cannot occur,” he said, met with rounds of applause.

“We cannot allow a beachhead of terrorism to form inside America,” he continued. “That is why my administration has been working on improved vetting procedures, and we will shortly take new steps to keep our nation safe — and to keep out those who would do us harm.”

Trump talks terrorism and vetting those who enter the USA. #jointaddress pic.twitter.com/PooDv1nmWH