At the end of his statement, Dirks said he the school “encourage[s] those of you who wish to exercise your right to protest this event to review our standing suggestions regarding how to protest safely.”

Instead of protesting “safely,” protesters tore down barricades, destroyed buildings, and set the campus on fire:

Masked protestors just shot off fireworks and are tearing down fences at Berkeley. Milo inside. pic.twitter.com/3SRNLjuTVn

Off-campus buildings also suffered the wrath of the rioters, with one having “kill fascists” spray-painted on it:

Rioters have been vandalizing storefronts in Berkeley with words like "kill fascists" and "the power is in the streets." pic.twitter.com/xMKYKceShs

As a result of the violence, Berkeley eventually pulled the plug on Yiannopoulos’ talk. In a statement, Berkeley claimed to oppose the violence:

We condemn in the strongest possible terms the violence and unlawful behavior that was on display, and deeply regret that those tactics will now overshadow the efforts to engage in legitimate and lawful protest against the performer’s presence and perspectives.

We regret that the threats and unlawful actions of a few have interfered with the exercise of First Amendment rights on a campus that is proud of its history and legacy as home of the Free Speech Movement. As Chancellor Dirks made clear in his message to the Berkeley campus community, while Mr. Yiannopoulos views, tactics and rhetoric are profoundly contrary to our own, we are bound by the Constitution, the law, our values, and the campus’s Principles of Community to enable free expression across the full spectrum of opinion and perspective.

In light of the protests, Trump took to Twitter to criticize Berkeley for restricting free speech. He also suggested the school have its federal funding revoked as a result: 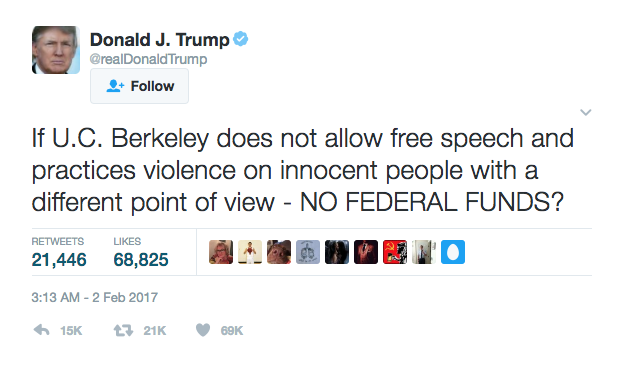