I am absolutely devastated. I actually said to a friend earlier that I am so disgusted with the Chicago Cubs, a team/fan relationship that has lasted my entire life, that I am seriously debating on whether or not to remain a Cubs fan.

The fan who was “caught” on camera giving an upside down “okay” sign during a Cubs telecast has been indefinitely barred from Wrigley Field in Chicago, as well as “other ticketed areas.”

During the [Cubs] game Tuesday, [reporter Doug] Glanville, who is black, stood beside the Cubs’ dugout, talking on-air to announcer Len Kasper about the Cubs’ offense when a fan in the background started making several gestures.

The bearded fan, who was wearing a grey Cubs sweatshirt and blue bottoms, held an upside-down “OK” sign — which has been associated with white nationalists — behind Glanville’s head before the broadcast cut to a graphic.

While the gesture has also been used as part of the “circle game,” in which someone tries to trick a friend into looking at them making a similar hand gesture, [Team President of Business Operations Crane] Kenney said on 670 The Score that team officials met and decided it was more likely the gesture was used in a “racist way.”

So Chicago Cubs team officials are now the arbiters of intent? They think they have the power to determine a person’s intent, in action or comment, without hearing what the intent may have been from the person who made the action or comment.

Sorry, but no matter how highly they may think of themselves, they guaranteed do not have that ability.

Just to give you an idea of what kind of front office personnel we’re dealing with here, look at what team president Theo Epstein had to say about the incident.

“It gave me shivers to watch that, that that would take place at Wrigley Field,” Epstein said.

Here’s an image of the apparent “offense”: 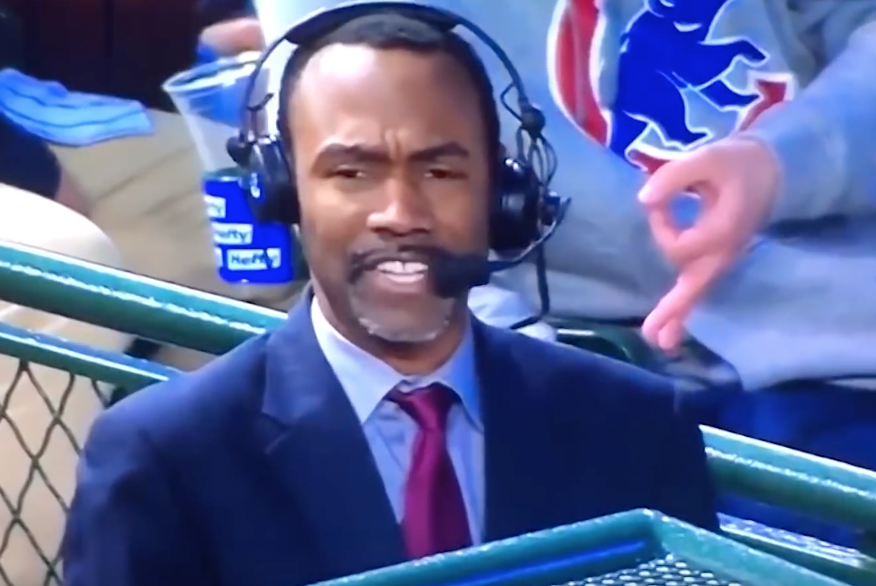 “Shivers?” Really? It seems the Cubs may have fallen for a hoax move by the questionable website 4chan.

The Anti-Defamation League (ADL) even has an article explaining “How the ‘OK’ Symbol Became a Popular Trolling Gesture” (To see visual proof of the 4chan hoax, click on the ADL link):

The “OK” hand gesture originated as one of these hoaxes in February 2017 when an anonymous 4channer announced “Operation O-KKK,” telling other members that “we must flood Twitter and other social media websites…claiming that the OK hand sign is a symbol of white supremacy.” The user even provided a helpful graphic showing how the letters WP (for “white power”) could be traced within an “OK” gesture. The originator and others also suggested useful hashtags to help spread the hoax, such as #PowerHandPrivilege and #NotOkay. “Leftists have dug so deep down into their lunacy,” wrote the poster, “We must force [them] to dig more, until the rest of society ain’t going anywhere near that s***.”

Judging by the responses to pretty much any Twitter post the Chicago Cubs have made in the last 24 hours, fans aren’t happy with the organization. Many have posted gifs, memes and pictures of notable people, like Beyonce and Rep. Alexandria Ocasio-Cortez (D-N.Y.), giving the “okay” hand gesture like it was…well, okay.

The fan who was banned didn’t even give the sign in the same way that the people who actually think the gesture is racist claim his intent was.

However, I won’t be like the Cubs and claim that I absolutely know what the fan’s intent was. Maybe he was trolling, because he knew the reaction he would get. Maybe he was actually just playing the “circle game,” like so many believe he was. Maybe he was being a racist jerk. I don’t know. But, neither do the Chicago Cubs.

What I do know is that the fan didn’t have an opportunity to defend himself, despite the Cubs claiming that they called the fan multiple times. Whatever the case, things like this set a dangerous precedent where companies and organizations can erase you from whatever they want for whatever reasons they see fit.

I love baseball, and I thought I loved the Chicago Cubs. They’ve been a part of my life from the very beginning. I just don’t know if they deserve that type of loyalty anymore.

For those of you that don’t know, here’s an explainer of the “circle game” from a TV show that’s almost 20 years old (FYI, the game is older than that):