Time to Say Goodbye! Yelp to Begin Labeling Businesses with Complaints of Racism

The people at the business review website and app Yelp seem to have lost their minds. Yup. They’ve gone “woke,” too.

Yelp made an announcement on their Twitter account on Thursday that they will be labeling businesses that have complaints of racism against them with a new "Business Accused of Racist Behavior Alert” notice. You can view Yelp's full Twitter thread by clicking here.

Could this be Yelp’s version of making Jewish people wear a yellow Star of David on their clothing? That might be a stretch, but this is how things like that begin.

Yelp claims that along with the alert, “a news article where they can learn more” will be provided.

Now, when a business gains attention for reports of racist conduct, Yelp will place a new Business Accused of Racist Behavior Alert on their Yelp page to inform users, along with a link to a news article where they can learn more. https://t.co/1K2bJ46uM8

However, what will prevent what happens regularly on social media platforms, like Twitter, from happening on Yelp as well? There are groups on social media designed specifically to complain about businesses or individuals who may not fall in line with their way of thinking, like the far-left group Sleeping Giants.

Or, what would prevent a rival local business from creating a bunch of fake Yelp accounts so they could smear their competition?

Here's what the Yelp alert would look like if applied to a business, according to filmmaker and political commentator Mike Cernovich: 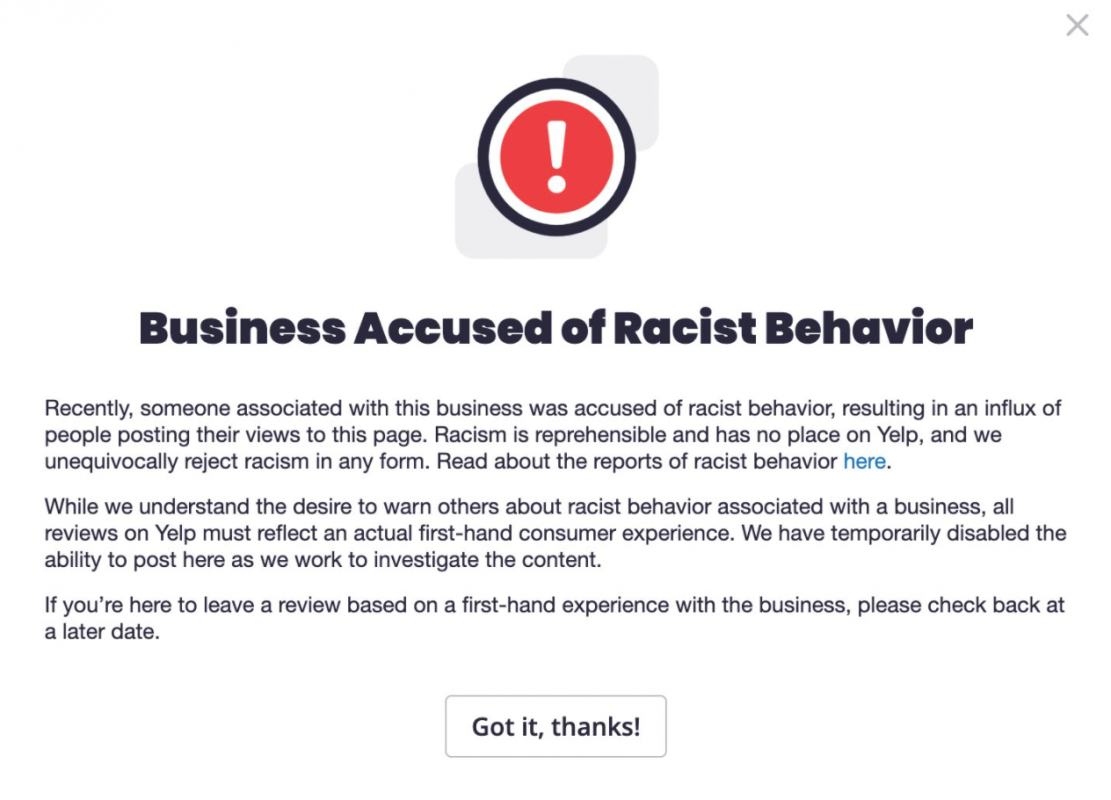 The problem with “woke” cult-ure — and yes, I separated “cult” intentionally — is that they never think things through completely before they go ahead with their push to brainwash everyone to think just like them. That’s why, more times than not, when you “get woke,” you “go broke.”

Many people on Twitter let their criticism of Yelp's move be known:

So when a customer hallucinates that they’ve experienced racism you’re going to alert the entire world that the restaurant is racist?

I’ve never once used Yelp, personally. I like to try different restaurants with an open mind, not with a pre-conceived bias that I got from Ted down the street who all of a sudden thinks he’s a food critic. If movie critics have taught us anything, it’s that we should try things for ourselves and quit letting others make the decisions for us.

If you try something and don’t like it, just don’t frequent that establishment anymore. It’s that simple. As far as the racism notifications, it just proves that powerful companies with a lot of influence don’t always use intelligence.