Scottish Student Mocks ISIS, Gets Investigated For a 'Hate Crime'

The liberal habits of stupidity, hypocrisy and being perpetually offended isn’t exclusive to those in the U.S. We can now add Scotland to the mix.

An Edinburgh University law student is under investigation by the school for allegedly perpetrating a “hate crime” after he mocked ISIS.

Robbie Travers -- who is also a writer for the Gatestone Institute, according to his Facebook page -- is in hot water with university officials after another student complained about two Facebook posts Travers made in April following the U.S. bombing of an Islamic State (ISIS) compound in Afghanistan.

Here are the two posts in question: 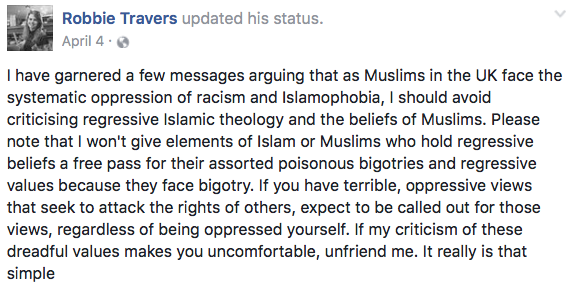 Unfortunately, unlike those who criticize Islam in the U.S., Travers doesn’t have free speech in Scotland.

According to the Scotland Police website, “A hate incident is any incident that is not a criminal offence, but something which is perceived by the victim or any other person to be motivated by hate or prejudice.”

Firstly, if it’s not a criminal offense, then why is it considered a crime? And secondly, these “hate crimes” are subjective to the person hearing the speech. What is offensive to one person might not be offensive to another person.

Travers found himself up the social justice creek after Esme Allman, a “second-year history student and the former black and ethnic minority convenor of the university’s students’ association," complained about the post.

And, juding by her comments, this social justice crybaby believes that “hate crimes” should only be construed one way.

Here’s what Allman had to say, according to her complaint:

Well, Allman certainly has the radical liberal tactic of promoting “panic and fear” as her ridiculous reason for wanting to persecute Travers. And of course, she brought up “Islamophobia.”

Apparently, it’s Islamophobic to bash a terrorist organizations such as ISIS. After all, it’s not like ISIS has done anything worthy of scorn -- like beheading people, lighting them on fire or drowning their victims in a cage.

Travers responded to the investigation twice within the last day through Facebook: 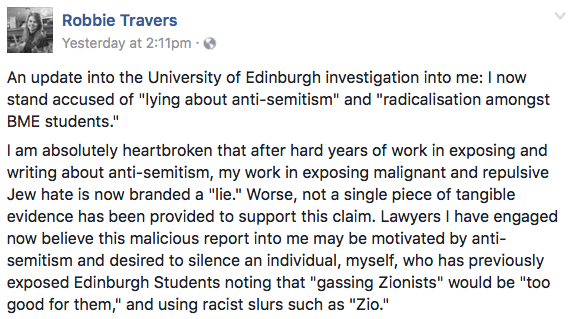 Good luck, Robbie. Don’t let The Man (or woman, or whatever pronoun we’re using this week) get you down.