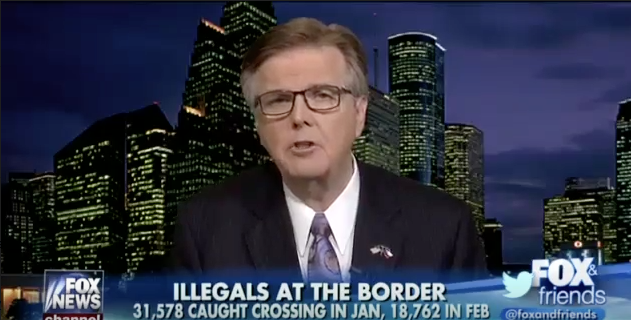 While appearing on “Fox & Friends” Friday morning, Texas Lt. Gov. Dan Patrick said that while deportations are going down due to President Trump’s messaging, there is still a need for a border wall.

Patrick appeared on “Fox & Friends” to discuss White House Press Sec. Sean Spicer saying border crossings are down 40 percent, despite Trump’s plan to build a border wall not yet being enacted.

“I’ve always thought a part of the plan was marketing, the message that you send,” Patrick said.

“You know we talk about sanctuary cities, Barack Obama made America a sanctuary country. He rolled out the red carpet. People felt like they could get here once they got past the border, they could stay. That’s what their relatives told them,” Patrick explained.

“Now the message is wall, not red carpet, and they get the message back from their relatives and friends who are here that it’s tougher to cross. They see television. They see that we’re hiring more ICE agents, more border patrol agents, and they understand that we’re serious about this. Messaging works. We still need the wall though, Steve,” Patrick added.

Patrick explained that when governments “educate, medicate, and incarcerate” illegals, it creates a “real cost” for the government. He also mentioned how the wall is necessary because of crimes committed by illegal immigrants, adding:

“And Steve, the reason we need the wall is too many people--most people come here for the American dream--but too many criminals come with them. In just the last four and a half years, in Texas, we’ve put over 212,000 people in jail who are criminal aliens. We’ve charged them with 566,000 crimes over a thousand sexual assaults, a thousand murders, over 6,000 sexual assaults, 67,000 drug offenses, 67,000 assaults. I mean, think about that. People who’ve come here illegally, the criminals who come here who blend in with everyone else who is coming for the American dream, almost 600,000 crimes in Texas from January of this year just through June of 2011.”

“That has to stop and when we put up the wall, when we deport these people, we have to keep the criminals from coming back. Because how many times on your morning Fox News do you say, 'This person’s been deported two, three, four times, still committing crimes.' So we need the wall.”