The athletic director of Soddy-Daisy High School in Tennessee has been placed on administrative leave for a comment he made in a video addressed to students.

Jared Hensley, when giving remarks on a change in the school's dress code policy, asked students to accept that athletic shorts would no longer be allowed, telling students, "that's the rules."

He went on to say, “If you really want someone to blame, blame the girls because they pretty much ruin everything. They ruin the dress code, they ruin well - ask Adam, look at Eve - you can really go back to the beginning of time.”

At this time there is no information on why, exactly, athletic shorts have been banned by the school.

The video was uploaded to YouTube and was later deleted, but the Chattanooga Time Free Press obtained a copy and posted it to their own YouTube channel.

While Hensley appeared to just be using sarcasm throughout the video, the school district didn’t find this humorous, stating to the Chattanooga Times Free Press, "We find the comments about young women in this video inexcusable, as the sentiments expressed do not align with the values of Hamilton County Schools. The situation is under investigation, and this employee has been placed on administrative leave effective immediately.”

The disapproval didn't stop there, with school board member Tucker McClendon stating, "I think it was a stupid thing to say. It was inappropriate message."

"I would really like to see an apology to the women of Soddy Daisy and that staff and the women across the county," he added.

Not everyone saw Hensley, who is also the school’s vice principal, in the same light. Soddy-Daisy High School Senior Class Vice President Paige Dunny expressed support for Hensley to the Chattanooga Times Free Press, saying in an email, “I personally know Mr. Hensley and would like to say that he is one of the most supportive and nicest people/men I know. To put it into specifics, I had his gym class before he was vice principal and not once was he sexist or treated us any less because we were girls. There are many who stand behind him. I'd hate to see such a wonderful man lose something he cares so much about over a comment that he didn't mean. While distasteful, it doesn't give a glimpse into the man he actually is.” 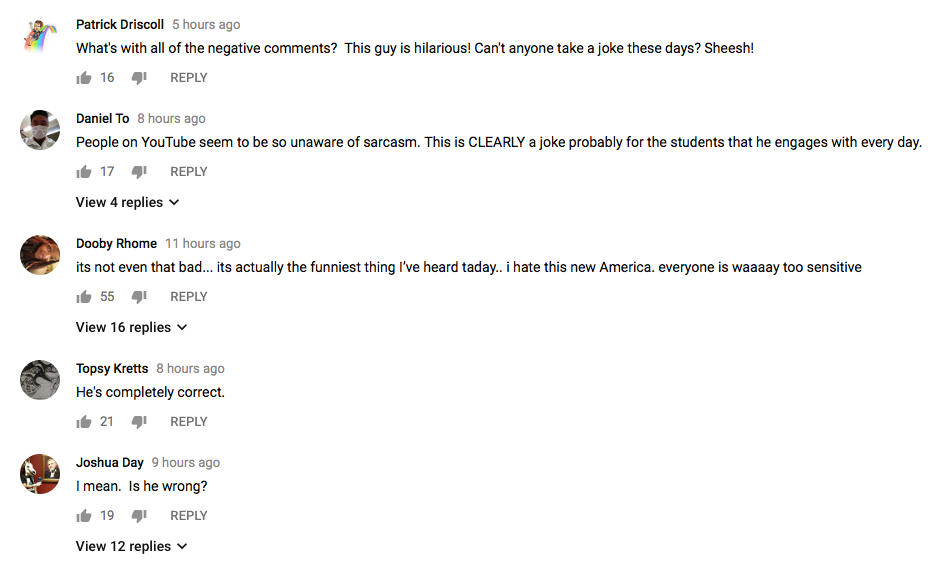 The full “original” video has been posted by WTVC, it can be seen below: