Teen Admitted to Stanford After Writing ‘#BlackLivesMatter’ 100 Times on Application

A Muslim teenager from New Jersey was accepted to the prestigious Stanford University after he wrote “#BlackLivesMatter” a hundred times on his college application.

Ziad Ahmed, a senior who attends the $34,600 a year private Princeton Day School, posted his acceptance letter--and the essay that helped get him accepted--on Twitter. The tweet shows that when he was prompted to answer the question, “What matters to you, and why?” Ahmed simply wrote the hashtag “#BlackLivesMatter” one hundred times.

In his acceptance letter, Stanford emphasized how the university loved the “passion, determination, accomplishments and heart” shown in Ahmed’s application. They also said he will be joining a “diverse, joyful, and welcoming campus community with a shared determination to make our world better” if he chooses to attend Stanford. 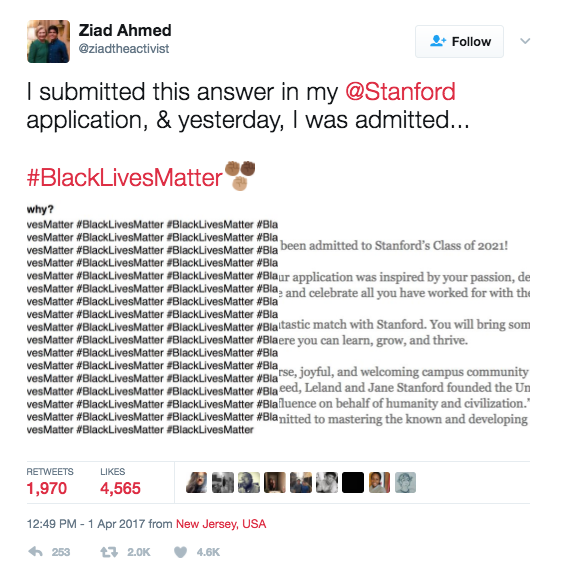 In an interview with Mic, Ahmed said, “I was actually stunned when I opened the update and saw that I was admitted.”

“I didn't think I would get admitted to Stanford at all, but it's quite refreshing to see that they view my unapologetic activism as an asset rather than a liability,” he added.

Ahmed said he included a reference to Black Lives Matter because he feels “unapologetic progressivism is a central part of my identity, and I wanted that to be represented adequately in my application.”

“To me, to be Muslim is to be a BLM ally, and I honestly can't imagine it being any other way for me," Ahmed explained. “Furthermore, it's critical to realize that one-fourth to one-third of the Muslim community in America are black ... and to separate justice for Muslims from justices for the black community is to erase the realities of the plurality of our community.”

For a student living on campus at Stanford, the College Board estimates the total cost of attendance is $67,291.

Mic reports Ahmed has also been accepted to Yale University and Princeton University and is interested in studying international relations, science, economics, and race and ethnicity studies. In 2016, Ahmed won the Princeton Prize in Race Relations.