Is Ted Cruz The Most Conservative Candidate In Modern History?

Is Ted Cruz the most conservative presidential candidate in modern history? Well, according to polling aggregation website "Five Thirty Eight," he is.  By a mile.

While it's pretty clear that the article's author, Harry Enten, is not a Cruz fan and views his conservatism as a net negative, it appears that his calculations are unbiased. He has collected candidate's voting records, public statements and donation sources and put together a graph of how conservative major GOP presidential candidates have been going all the way back to Richard Nixon. 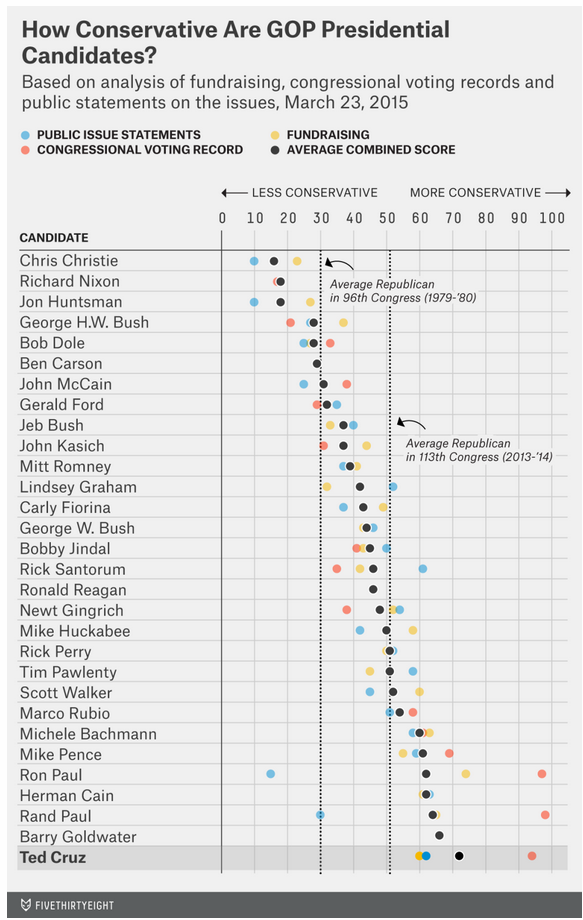 Cruz has very high scores on his voting records from conservative groups like Club For Growth (96%) and Heritage Action For America (95%).  Based on all of the data, Five Thirty Eight has concluded that Ted Cruz is far and away the most conservative major party presidential candidate in modern history, beating out other candidates well know for their staunch conservatism such as Ben Carson, Michelle Bachmann, Barry Goldwater and even President Ronald Reagan.

Of course, it's important to take these findings with a grain of salt.  As the electorate has changed over time, the scale by which a candidate's conservatism is judged naturally shifts as well.  But, at this point in our history, it would appear that Cruz is offering the country a conservative vision that is unparalleled in recent history in his effort to take the White House.