A teacher in Cambria County, Pennsylvania has found themselves in a giant pot of self-heated water after giving her middle school students an assignment telling them to practice packing their bags in case Trump “takes control of the United States” and sparks riots in the streets.

“President Trump is trying to take control of the United States! There are fights in the streets! You have to pretend that you are a refugee being forced to leave your home, never to return,” the assignment began.

The activity instructions then devolved into some semblance of non-English that’s embarrassing for any teacher, regardless of the ridiculous nature of the homework itself.

“Please have a parent to time them for 10 minutes while they packed a bag,” the instructions continued. “When the time was up they were to take a picture of the contents of their backpack and then email it to me. If no picture, then draw it. You will have to present to us why you chose these items.” 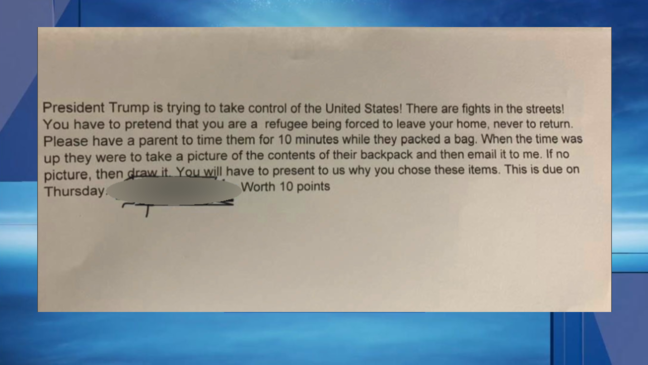 According to WJAC 6 News, Cambria County District Superintendent William Marshall said parents and teachers were alerted immediately after the outlet obtained a photo of the assignment and reached out for comment, adding that the teacher had “realized a huge error and called each parent individually” to apologize.

“Marshall said the teacher understands that class should not be used as a political forum,” 6 News added.

Maybe I’m thinking crazy, here, but it seems to me that if it takes public outrage for you to realize that telling 10-year-olds to pretend they’re refugees in case the dually-elected president goes rogue and tries to “take control” of the United States, maybe you don’t understand that a classroom is not a political forum.

Maybe you’re just bummed you got called on it.